‘European Union & Armenia: Relations and the Way Ahead’ Conference Held in European Parliament 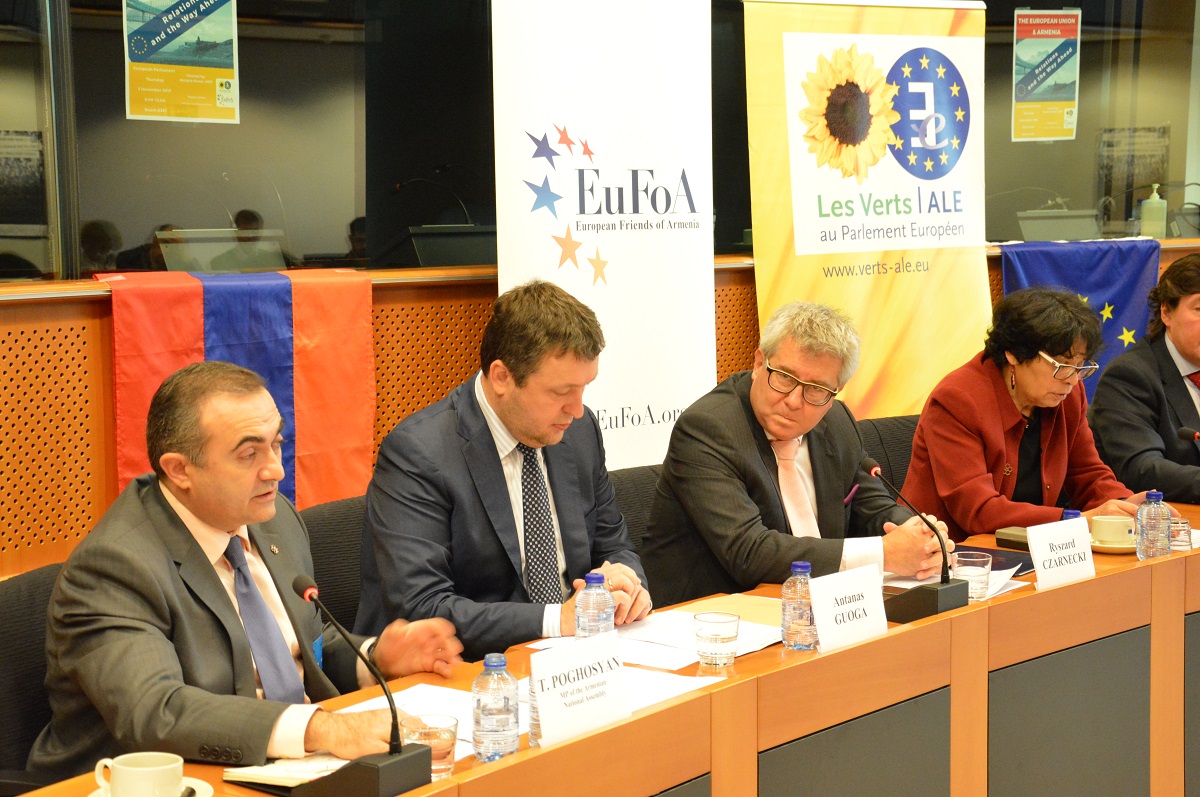 A conference on the institutional relations between the European Union and Armenia took place in the European Parliament yesterday. The event was jointly organized by MEP Michèle Rivasi and European Friends of Armenia. It featured a very diverse selection of keynote speakers, including the main officials that will be involved in the upcoming EU-Armenia negotiations that will start next week.

The event was introduced by Michèle Rivasi, Vice-Chair of the Greens/ European Free Alliance group in the European Parliament. For many years she has been actively contributing to building stronger ties between Armenia and Europe. She is also a member of EuFoA’s Europe-Armenia Advisory Council. In her speech she underlined the importance of strong EU-Armenia relations.

´We share a lot of history with Armenia and I am thankful for what the Armenian culture has brought to our continent. It is very important to organize such an event because we want a better agreement between the European Union and Armenia.´ she said. ´I helped organizing this event so that we can all get a better understanding of the EU-Armenia relations. We hope to find solutions together with the politicians and also with civil society’.

‘Exchanges like this provide a great platform for both sides to put forward ideas and experiences. We managed to gather some of the key actors involved in EU-Armenia relations from a parliamentary and executive point of view, we wanted to cover EU-Armenia relations from all angles.’ he said. ‘I think that our discussions and conclusions are an interesting input to develop further our relations both at parliamentary level and for the negotiators of the new legal base. It is my conviction that both the European Union and Armenia will benefit from stronger ties and this we is exactly what we, European Friends of Armenia, are trying to achieve.’

Armenia is a founding member of the EURONEST Parliamentary Assembly and its participation therein has always been highly valued by the European Parliament. In his contribution Ryszard Czarnecki, Vice-President of the European Parliament and Vice-Chair of EURONEST, reflected on the current state of Armenia-EU relations and how he hopes they will develop.

Regarding the EU-Armenia legal basis, there is a growing consensus, both on the EU and the Armenian side on the need to upgrade it, as underlined during the Eastern Partnership (EaP) Summit in Riga in May this year. Taking into consideration that the current agreement was drafted in 1996, this new document should duly reflect how EU-Armenia relations have evolved since.

In this respect the Armenian ambassador to the EU commented ‘We are hopeful that through the active process of deliberations we will be able to reach an agreement on a new framework document that will reflect the essence and depth of our bilateral relations and set new guidelines for mutually beneficial cooperation.’

‘It is very important for Armenian to further develop its flourishing IT industry and energy sector in order to reduce its energy dependence’ said Mr Antanas Guoga, Vice-Chair of the European Parliament’s South Caucasus delegation.

The conference was attended by about 50 people working in the European Institutions, international organizations, diplomatic community, and media. The closing words were provided by Armenian MP Tevan Poghosyan, who is also member of the EU-Armenia Parliamentary Cooperation and EURONEST Parliamentary Assembly.

‘This is a very important discussion to have before starting the new EU-Armenia negotiations. I appreciated that there were a lot of interesting questions coming from the audience about our political situation and the positions of Armenia’ he said. ‘Armenia is very eager for more cooperation with Europe. This is a step by step process but will be helped by shared interests and values.’