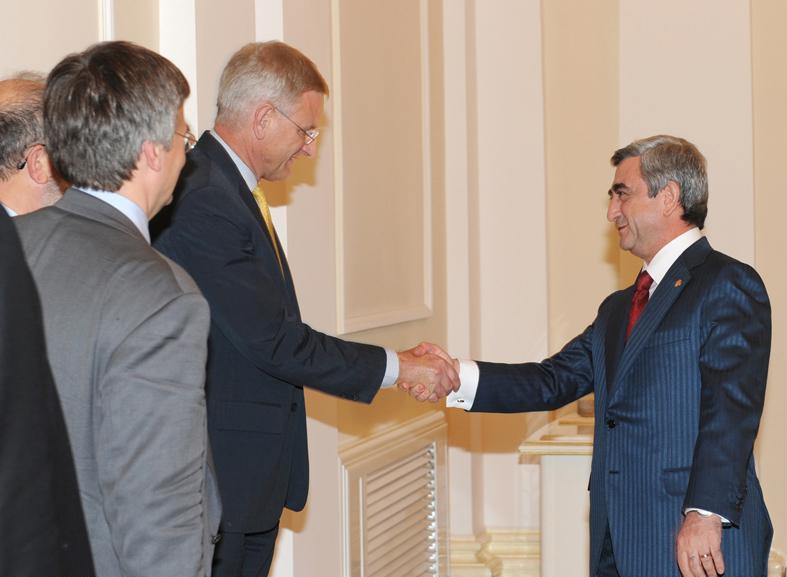 An EU troika visit organised by the Swedish Ministry for Foreign Affairs concluded its tour of the South Caucasus in Armernia on Monday 20 July, after visiting Georgia and Azerbaijan. The troika was composed of Carl Bildt, Swedish Foreign Minister, Karel Kovande, Deputy Director-General and Political Director in the European Commission, John Kjaer, Head of Unit, Peter Semneby, European Union Senior Representative, Paolo Barroso Simoes from the Council Secretariat, as well as Spain’s Ambassador on Special Mission to Central Asia, Santiago Chamorro, representing the next Presidency. The group met with Serzh Sargsyan, the President of the Republic of Armenia, Edward Nalbandian, Minister of Foreign Affairs, leaders of the parliamentary and non-parliamentary opposition parties as well as with the EU-ambassadors in Yerevan.

Below we provide you with several articles about the visit.

Armenia reaffirmed its commitment to European integration and pledged to continue reforms as it hosted on Monday a high-level European Union delegation touring the South Caucasus. The European Union ‘Troika’ led by Swedish Foreign Minister Carl Bildt was in Yerevan on July 20, after visiting Georgia and Azerbaijan, to meet President Serzh Sargsyan and other senior officials.
“Armenia is going to make necessary steps and reforms on its way to closer integration with the European family,” stressed Armenia’s Foreign Minister Edward Nalbandyan at a joint press briefing following talks with the EU Troika. The Armenian minister said a wide range of issues concerning Armenia-EU relations, as well as the Nagorno-Karabakh settlement process and Armenia-Turkey relations had been on the agenda of the Yerevan discussions with the senior EU representatives.
“Cooperation between Armenia and the EU is versatile and multifaceted. We cooperate within various formats and on various projects, in particular as part of the partnership and cooperation agreement, the European Neighborhood and Eastern Partnership policies,” stressed Nalbandyan. [He] reminded that in line with the agreements reached during President Sargsyan’s visit to Brussels last November, another format has been added to this cooperation – the presence of an EU consultation group in Armenia that advances the implementation of reforms in the country’s legislative, executive and judiciary spheres.
“We are grateful to the EU and its separate member states for assistance rendered in Armenia’s development,” said Nalbandyan. Nalbandyan said the current state of the Nagorno-Karabakh settlement process and the results of the most recent meeting between the presidents of Armenia and Azerbaijan in Moscow had been presented to the visiting EU troika. Armenia’s top diplomat also reaffirmed official Yerevan’s approach that the problem can be solved only by peaceful means.
Bildt, as a representative of Sweden that recently assumed the rotating EU presidency, voiced the EU’s support for the continuing peace process between Armenia and Azerbaijan. “The European Union stands ready to assist in the implementation of the agreement that we sincerely hope will be possible in the near future,” said Bildt, also voicing support for rapprochement in Armenia-Turkey relations.
During a meeting with President Sargsyan, Bildt emphasized the importance that the EU attaches to the Karabakh peace process conducted within the framework of the OSCE Minsk Group and voiced the EU support for the mediators’ efforts to broker a solution. Sargsyan, according to his press service, said that the Moscow negotiations late last week passed in “somewhat different” conditions, since the Minsk Group had already made public the principles the negotiations have been conducted around. The Armenian president even considered that to be of assistance, since, he said, “unfortunately, it is not always that the sides present to the public the issues about which they talk during negotiations.”
“I think it should become clear to everyone now that the main issue is Nagorno-Karabakh’s status that must be decided by a free express of will and have a legally binding force. When we manage to give this issue a proper formulation free of ambiguity, I think then the negotiations will proceed more smoothly,” said Sargsyan.
More sources: