Tension rises dangerously in Nagorno-Karabakh as ceasefire negotiations are underway 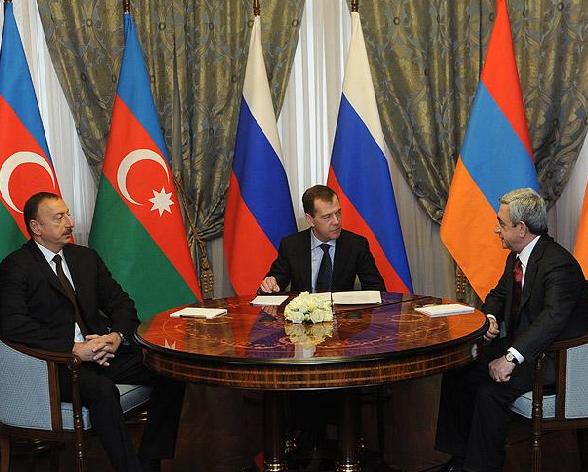 European Friends of Armenia (EuFoA) shares the “deep concern” that members of the Minsk Group and the OSCE expressed after a visit to Nagorno-Karabakh amid increasing violence in the region, especially after tensions have been growing in the past week.
The number of casualties has dramatically risen over the weekend, including those of Armenian and Karabakhi civilians.
Last week, an Armenian villager was injured by Azerbaijani sniper fire across the Armenian border in Aygezdor. “Civilians living in the area become targets in this conflict, which is also very worrisome,” says EuFoA’s Director Eduardo Lorenzo Ochoa.
The international community, including the EU, the US, France and Russia have expressed grave concern. Families living near the Armenian-Azerbaijani border remain in their houses as of now.
In the latest EEAS statement, Armenia and Azerbaijan were called on to “immediately respect the ceasefire, refrain from the use of force or any threat thereof, and continue efforts towards a peaceful resolution of the Nagorno-Karabakh conflict.”
EuFoA also calls on newly appointed EUSR for the South Caucasus Herbert Salber to take action accordingly.
Developments over the last years
The International Crisis Group states, “there have been ongoing skirmishes and periodic hostilities growing during the last 2 years.”
Nagorno-Karabakh proposed in 2006 that Armenia, Azerbaijan and Nagorno-Karabakh mutually reaffirm their commitment to strengthening the ceasefire regime reached under the auspices of the OSCE on 6 February 1995, yet no positive response from Azerbaijan has followed.
At the same time, several human rights activists have been imprisoned in Azerbaijan, stirring international uproar. Leyla Yunus from the Institute for Peace and Democracy in Azerbaijan was detained, resulting in a response from the EU saying: “The arrest of Dr Yunus seems to be part of a wider picture of mounting restrictions targeting civil society in Azerbaijan. The EU has repeatedly made its serious concerns known to the Azerbaijani government, both in public and in private.”
Azeri human rights activist Rasul Jafarov has also been detained in what Human Rights Watch calls “an effort to silence its critics”, while the OSCE Representative on Freedom of the Media calls on the Azerbaijani authorities “to immediately release Jafarov and stop persecution of critical voices.”
Yet this wave of imprisonments of civil activists and NGO representatives, many of them working on EU-funded programmes and involved in confidence-building measures in regards to the Karabakh conflict, does not help to improve the situation.
Confidence building measures
The OSCE, the Minsk-Group Co-Chairs and the EU have repeatedly urged the two sides to remove their snipers from the line of contact and implement the “Sochi agreement” for an investigation mechanism for each of the shooting incidents. The Armenian side has welcomed these programmes.
Since the signing of the ceasefire agreement 20 years ago, in 1994, the OSCE MG is seeking to broker agreements to allow for trust-building (e.g. sniper removal and OSCE investigations into sniper incidents) and peace (Madrid Principles).
This week, as tensions have been escalating, a meeting between Armenian President Sargsyan and Azerbaijan’s Aliyev is scheduled for August 8-9.
“When you put all these elements in perspective: the imprisonment of Azeri NGO leaders engaged in EU confidence-building programmes, the systematic rejection of any measure to reduce tensions at the line of contact, as well as the ceasefire violations and the targeting also of civilians by Azerbaijan, one can only conclude that the Azerbaijani leadership is not acting faithfully to both the EU and the OSCE Minsk Group,” Mr Lorenzo Ochoa says.

Statement by the Spokesperson of the EU High Representative and Stefan Füle on the arrest of Leyla Yunus in Azerbaijan
http://eeas.europa.eu/statements/docs/2014/140802_01_en.pdf

Nagorno-Karabakh: Risk of War in the South Caucasus, published by the International Crisis Group
http://www.crisisgroup.org/en/multimedia/podcasts/risks-of-war-in-the-south-caucasus.aspx

Statement of the Ministry of Foreign Affairs of Nagorno-Karabakh on the 20th anniversary of the ceasefire agreement
http://nkr.am/en/news/2014-05-12/618/