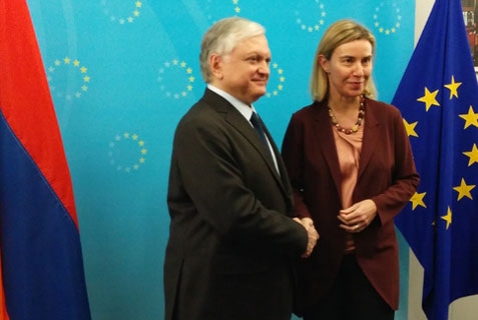 The new members of the European Commission, confirmed by the European Parliament, will take office from 1st November. They will work under the direction of Mr Jean-Claude Juncker, nominated, for the first time, according to the results of the European parliament elections.

Ms Federica Mogherini, former Minister of Foreign Affairs in Italy, has been appointed High-Representative of the Union for foreign affairs and security policy and Vice-President of the European Commission (HR/VP). She will succeed to Ms Catherine Ashton and be in charge of the general coordination of the European policies regarding foreign relations, common security policy, as well as the European diplomacy.

The European Neighbourhood policy and Enlargement negotiations portfolio has been assigned to Mr Johannes Hahn, formerly Commissioner to Regional policy. Is this experience of working in close relation with the local authorities going to have an influence on Mr Hahn’s approach to address democracy, good governance and rule of law in the partner countries?

What aspects of the neighbourhood policy are to be set as priorities by the new commission? What challenges are to be faced in South-Caucasus? Ms Federica Mogherini and Mr Johannes Hahn gave answers to these questions during their hearing sessions at the European Parliament.

She also strongly insisted on the need for all Member states to “stay united“, to present a European coherent and comprehensive answer to the challenges the Union has to face, such as the Ukrainian crisis or the conflict in the Middle-East. Ms Mogherini therefore re-affirmed the need for the European Union to be a “global actor” in the international concert. The difficulties of finding compromises with 28 Member states can be overcome: “We, at the European Commission, have to take care that all our tools fit to one unique flow of policy“.

Human Rights at the heart of the relations with neighbouring countries

“Human rights will be one of my overarching priorities and I intend to use them as a compass“. Ms Mogherini, referring to article 21 of the Treaty of Lisbon, reiterated the EU’s mission to “mainstream human rights in [its] external policies“. To reach this objective, Ms Mogherini stressed the importance of working in close collaboration with the European Parliament, as well as to “deepen the engagement with our interlocutors in international and regional organizations, regularly engage NGOs and civil society groups and closely coordinate with Member States“. Moreover, “we [Europeans] have common work, just as we have a common agenda. It will be on human rights, where I think as Europeans we have a particular responsibility in developing a coherent agenda, including our internal policies, and let me mention the main domains and I know we can come back to these: media freedom, women and the freedom of religion.”

Relations with Azerbaijan will take a very important place in the coming years, as a consequence of the opening of the Southstream corridor. Therefore, Ms Mogherini insisted “that precisely because we are investing a lot on energy with Azerbaijan, (…) I think we need to stress even more the need to respect human rights, especially in the fields of media and politcal activists.”

Addressing the EU relations with Russia, Ms Mogherini explained that even though the strategic partnership is currently interrupted as a result of the Ukrainian crisis, “it is still a strategic country in the world (…), so I guess we will need to deeply reassess together our relations in the next five years“.

Questioned about the necessary evolution of the neighbourhood policy, following notably the Ukrainian crises, Mr Hahn affirmed his conviction that “the ENP needs to be able to respond more quickly and effectively to crises. The policy needs to work not just country by country, but field by field, to ensure that we have the right tools to deliver on all key issues, including energy, free trade, migration, and with a particular emphasis on good governance“.

Considering the principle of differentiation between the partner countries as a “core element of ENP“, Mr Hahn affirmed his intention to deepen it in the coming years, in order to favour the implementation of reforms in the countries showing the most efforts. The EU indeed introduced the so-called “more for more principle” in 2011, allowing the increase of the financial help to countries showing actual efforts to implement democratic reforms. “Human Rights conditionality must be used astutely to give us more leverage over reforms. (…) I will strengthen these tools, broadening the more-for-more principle, developing a long-term strategy for promoting European values and in particular by targeting support to civil society in our partner countries“.

The future commissioner underlined the essential role of civil society organisations and local government in the reforms towards more democratic societies, showing a greater respect of good governance and rule of law, following the European standards. “Civil society organisations play a crucial role in vitalising the public debate, providing policy input, and developing new initiatives. I see them as major actors in promoting democracy and human rights, the rule of law and good governance as well as sustainable economic and social development.”

What is next for Armenia?

Given Armenian international commitments (joining the Eurasian Customs Union) EU-Armenia relations need to be redefined, taking them into consideration along with the high degree of convergence and cooperation achieved by the EU and Armenia in the last 15 years. It would allow the EU and Armenia to further develop their relations by capitalising on their current achievements, given that the vast majority of areas for cooperation are non-trade related.

In our policy paper “EU-Armenia relations: future development and prospects“, published in March 2014, we outline what the new agreement would provide: a firmer commitment to an institutionalised dialogue on common values, notably democracy and rule of law, good governance, and respect for human rights and fundamental freedoms, including minorities’ rights, a market economy and sustainable development.