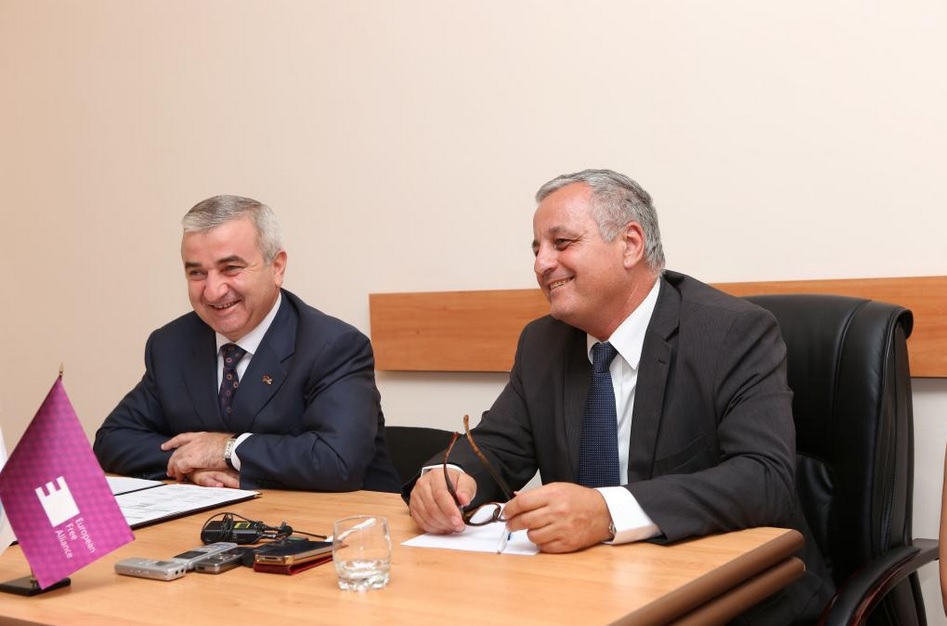 Two representatives of a pan-European political party travelled to Nagorno-Karabakh following an invitation from the chairman of its national assembly, Ashot Gulyan. The European Free Alliance (EFA) was represented by its president, François Alfonsi and Jordi Sebastia, MEP. The visit was facilitated by the European Friends of Armenia, as part of its ongoing effort to encourage dialogue and cooperation between European and Karabakhi civil society.

The representatives of the European Free Alliance signed a declaration of cooperation with the Democratic Party of Artsakh (DPA), their sister party in Nagorno-Karabakah. The document highlights common commitment to increasing involvement between European Union and Karabakhi civil society and adherence to European values.

The visit was organized following the recommendations of the three European Union institutions in their adopted documents regarding Nagorno-Karabakh. Eduardo Lorenzo Ochoa, director of European Friends of Armenia, accompanied the two European politicians during their visit.

‘I am proud to help strengthening relations between European and Karabakhi society’ he said. ‘European Union representatives need to see for themselves that Nagorno-Karabakh is a democracy which respects fundamental freedoms’.

Mr Alfonsi and Mr Sebastia took part in the cultural celebrations which were held to mark the 24th anniversary of the declaration of independence of Nagorno-Karabakh.  The two EFA representatives were welcomed to the National Assembly of Nagorno-Karabakh by all Karabakhi political groups and also met the president of the Nagorno-Karabakh Repbulic, Bako Sahakyan, and Karen Mirozyan, the minister of foreign affairs.

‘The Nagorno-Karabakh Republic has been able to develop a well-functioning democratic model inspired by EU values such as the respect for fundamental freedoms, democracy and the separation of powers and the rule of law.’ said Mr Sebastia. ‘Therefore they deserve our support’

At the University of Stepanakert Mr Sebastia spoke to students of journalism about what they can do to create a better understanding between Europe and Nagorno-Karabakh.

‘The fact remains that you are now a fully-fledged and independent democracy. This is the success that you have to broadcast to the world.’ he told the students. ‘And this is possible! Good proof of it is that the two groups of journalists brought to Artsakh by the European Friends of Armenia in 2014 and 2015 published over 10 pieces in the press. Most of them focused on the Karabakhis way of life and the country’s most important features.’

The trip concluded with a visit to the Genocide Memorial in Yerevan. Back in Brussels, European Friends of Armenia will continue its work to further dialogue and understanding between Europe and the South Caucasus.