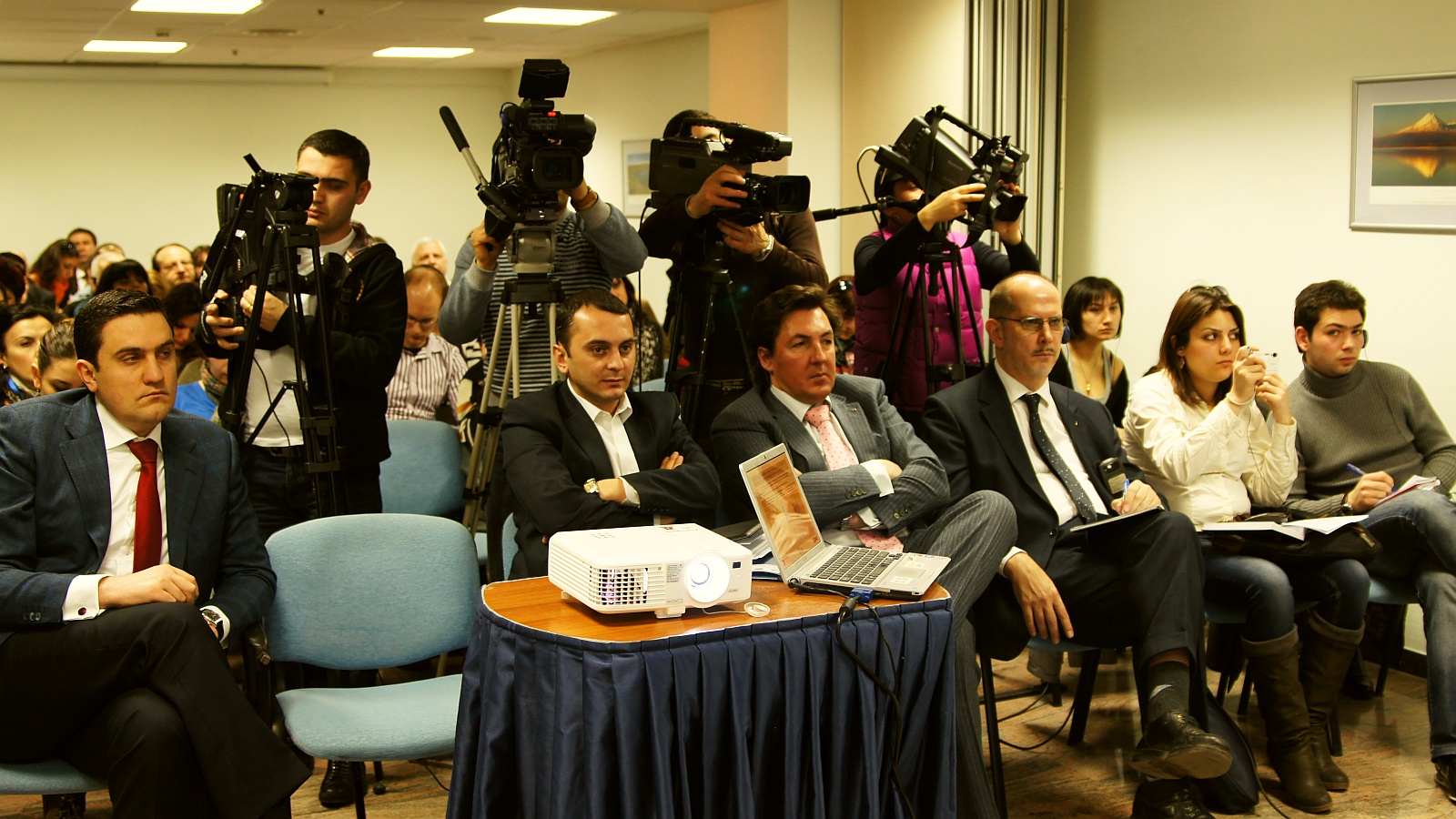 Today, European Friends of Armenia publishes the results of its poll titled “Poll: A Snapshot of Pre-Electoral Armenia”. The poll was conducted by IPSC and EuFoA, with TNS opinion providing extensive quality control and supervision. The fieldwork was conducted between 29 February and 5 March 2012.
At the beginning of the campaign period, the two largest parties score results without significant differences (error margin: 2.4%), but far ahead of any other party. Meanwhile, four smaller parties are all equally likely to pass the 5% threshold and move into the National Assembly, or not. “It is stunning that at the beginning of the campaign period, nobody can say if we will have a parliament made up of 6, 5, 4, 3, or even just 2 parties! This also means that nobody can today predict a specific outcome. The only thing we know is that already today, a very large number of people is already certain to vote.” comments Dr Michael Kambeck, EuFoA’s Secretary General.

Gagik Tsarukyan is the most popular party leader in Armenia, while Serzh Sargsyan still has a strong lead when asking for Presidential preferences. People across the country show dissatisfaction or distrust in political institutions, and the “perceived” situation in the country today is rather negative. However, the picture becomes more positive when the respondents were asked about the real situation of their own families, and when they evaluate the change of the general situation in Armenia over the last 5 years.
EuFoA provides this poll as non-Armenian and therefore non-partisan NGO. To ensure the highest level of independence and quality, this poll has been entirely supervised by the renowned international polling company TNS opinion. “We have assessed the methodology and supervised all steps of this poll. I am happy to say that this poll absolutely meets international standards and we were very satisfied with the level of quality” says Dr Steve Schwarzer, Methodology and Statistics Manager at TNS opinion, Brussels.
EuFoA has commissioned the poll for several reasons. In particular we want to:
• Raise public awareness about the elections, issues important for the people, and public attitudes towards politics, political parties and their leaders.
• Compare the results of the poll with those of our “benchmark poll”, commissioned by EuFoA in October 2010.
• Contribute to a more meaningful debate, based on political content more than party political propaganda or myths.
• Increase public transparency and trust in a realistic picture of political life in Armenia.
• Increase pressure for a good technical conduct of the elections by providing comparative data for the assessments of international observers.

The complete poll report can be found in Armenian and in English on our website at http://www.eufoa.org/en/publications

Poll: A Snapshot of Pre-Electoral Armenia

Background on the organisers:

TNS (http://www.tnsglobal.com) is the world leader in opinion research and custom/ad hoc research, has wholly owned subsidiaries or majority shareholding in companies in over 70 countries, with more than 150 offices across five continents. They provide market measurement, analysis and insight in over 110 countries. Their objective is to supply market and opinion research, applying the strictest technical standards through high-quality services and property-owned products.
TNS opinion is an entity within TNS, specialised in cross-country research. TNS opinion’s expertise in the field of political and social research and opinion polling is founded on more than 35 years of experience, expressed notably through their work on the Standard Eurobarometer, the largest general public opinion polling contract in the world, which they conduct on behalf of the European Commission. TNS opinion, in its capacity as a co-ordination center for opinion research, has undertaken numerous public opinion surveys in Europe, Africa and other regions of the world, covering different target groups, ranging from general public to elite surveys and business leaders and using different methodologies, such as face-to-face, telephone or online interviewing.

IPSC – Institute for Political and Sociological Consulting (www.ipsc.am) is a research institute in Armenia, specialized in sociological surveys through qualitative and quantitative methods, marketing researches and consulting. By 2012, IPSC has implemented over 90 surveys in the fields of politics, education, election monitoring, healthcare, marketing, etc. covering Yerevan, all urban and more than 80% of rural communities in Armenia, having interviewed about 155,000 respondents as of February 2012. IPSC designs, organises, conducts and analyses various types of Opinion Polls, Focus Group Discussions, In-Depth Interviews, Evaluation Surveys, Expert Interviews, Participatory Observations as well as surveys using advanced technologies such as Online Polls, CATI and CAPI.

EuFoA – European Friends of Armenia (www.EuFoA.org) is a recognised and registered non-governmental, non-profit organisation founded in Brussels as an AISBL (Association Internationale Sans But Lucratif) and operating mainly from there across Europe since May 2009. EuFoA seeks to build bridges between Armenian and European decision makers in the fields of politics, business and culture, and support Armenia’s further integration into European political, economic, and social structures. EuFoA’s work is dedicated to improving mutual understanding and to promote co-operation. Our goals include encouraging people to people contacts between key members of civil society, raising public awareness of Europe in Armenia, as well as raising awareness of Armenia and Nagorno-Karabakh in Europe.

Background on the poll:

One of the key components of Armenia’s relation with Europe and also for EuFoA is the democratic development of Armenia. The Republic of Armenia is only 20 years young and a developing democracy. Opinion polling by local actors has often been rather partial. EuFoA as a European and non-partisan NGO has therefore made it one priority to contribute to a more factual debate, to provide more transparency about real ratings of the competing parties and finally to deter from falsifications, all with the means of providing credible polling.

Therefore, on 19 December 2011, EuFoA has issued an international call for proposals searching for partners to conduct and supervise a public poll of voters in Armenia. TNS opinion won the tender for quality control and supervision and in co-operation with the local partner IPSC and us, the poll was conducted. The fieldwork was done between 29 February and 5 March 2012. EuFoA has commissioned the poll for several reasons. In particular we want to:
• Raise public awareness about the elections, issues important for the people, and public attitudes towards politics, political parties and their leaders.
• Compare the results of the poll with those of the “benchmark poll”, commissioned by EuFoA in October 2010.
• Contribute to a more meaningful debate, based on political content more than party political propaganda and myths.
• Increase public transparency and trust in a realistic picture of political life in Armenia.
• Increase pressure for a good technical conduct of the elections by providing comparative data for the assessments of international observers.