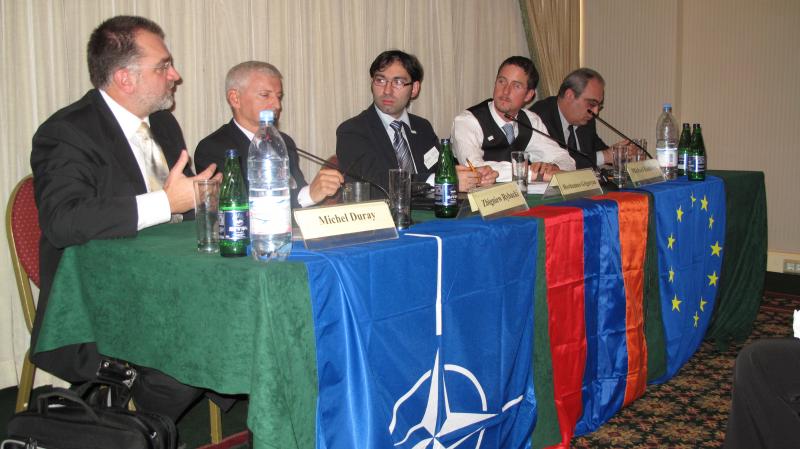 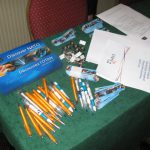 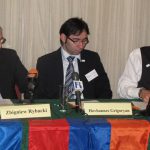 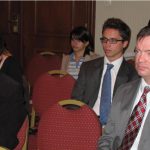 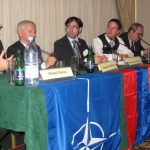 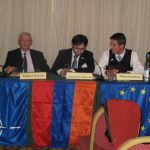 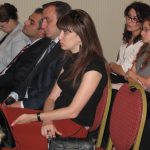 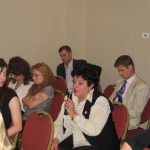 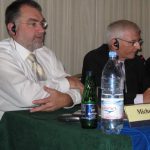 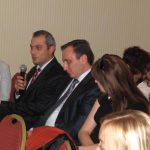 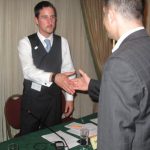 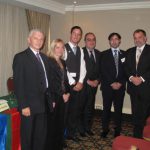 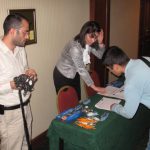 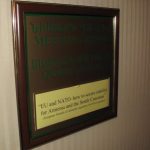 On Tuesday, 13 October 2009 in Yerevan, EuFoA hosted a conference entitled “EU and NATO – how to secure stability for Armenia and the South Caucasus”. The event was organised in the framework of NATO week in Armenia, and co-sponsored by NATO. To set the framework for the debate, EuFoA submitted a policy brief, entitled “EU-NATO Relations: Bridging the synergy gaps in the South Caucasus”.

The speakers for the event included Mr Armen Yedigarian, Director of Arms Control and International Security Department from the Ministry of Foreign Affairs of the Republic of Armenia, Mr Michel Duray, Head of NATO Outreach Countries Section, and Mr Zbigniew Rybacki, NATO Liaison Officer for the Caucasus. The conference was hosted by Mr Hovhannes Grigoryan, Director of EuFoA’s Armenian branch, and Dr Michael Kambeck, Secretary General.

Among the invitees for the conference were representatives of diplomatic corps, state agencies, NGOs, think tanks, as well as some individual experts. In total, 55 people attended the conference.

Zbigniew Rybacki, NATO Liaison Officer for the Caucasus:
Despite intensive cooperation with NATO, there are still some prejudices in Armenia towards the Alliance, which can be partially explained by NATO-Russia difficult relations, but also by the dynamics of relations between Armenia and Turkey. As for the latter, it will definitely change the situation, not only in the region, but also when it comes to Armenian attitude towards NATO. The Armenia-Turkey rapprochement is welcome, because it will have a positive impact on security in the region.
Since Russia and NATO do not oppose each other anymore (after a period of decline in relations), the prospect for Armenia and the region looks even better. In this context, Mr Rybacki underlined that the same elements influence the relations with other former Soviet states, not Armenia in particular.
Despite these difficulties, the cooperation with Armenia is quite intensive. Mr Rybacki stated that if Armenia considered its membership in NATO, it would be discussed, but so far it is not on the agenda (contrary to Georgia, since the Georgian government expressed its desire to join NATO).
Responding to a question on the role of NATO in solving frozen conflicts and deploying peace forces in Nagorno-Karabakh, Mr Rybacki stated that NATO is not involved in settlements of conflicts in Southern Caucasus and the only official position of NATO is settlement of the conflict in a peaceful manner.
In his concluding remarks, he said “we respect the decision of Armenia in having Russia as its strategic partner, yet we are ready to develop a closer cooperation with Armenia”.

Armen Yedigarian, Director of Arms Control and International Security Department from the Ministry of Foreign Affairs of the Republic of Armenia:

The cooperation with NATO is quite intensive, which is proven by the fact that the IPAP (Individual Partnership Action Plan) was recently renewed, and its previous results have been satisfying for both sides.
Mr Yedigarian confirmed Armenia’s decision to contribute to NATO peace-keeping forces in Afghanistan, and in this context reminded the audience that Armenia participates in similar missions in Kosovo and Irak. Armenia is also actively cooperating with NATO on emergency management, and is closely following new challenges to adopt its policies accordingly.
As to the EU integration, it is one of the priorities of Armenia’s foreign policy.

Michel Duray, Head of NATO Outreach Countries Section:
Mr Duray presented major aspects of NATO policy vis-à-vis South Caucasus. He underlined that NATO has strategic partnership with EU, Ukraine and Russia. In this context, he stressed that NATO’s strategic partnership with Russia is not in competition with the Russian-Armenian parallel structure.

Michael Kambeck, Secretary General of EuFoA:
Presenting the policy brief entitled “EU-NATO Relations: Bridging the synergy gaps in the South Caucasus”, Dr Kambeck talked about the security dynamics in the region. He mentioned the critical absence of security in South Caucasus. The lack of a regional institutional structure, enabling its actors to define common policies, results in a high level of insecurity in the region. In this context, it is important to mention that NATO and Russia are no longer adversaries, which is certainly a good development for Armenia, of whom Russia is a strategic partner.
However, when it comes to international actors in the region, the European Union has more diversified interests and approaches than NATO – the Union is interested in issues like economic development, human rights, good governance and civil society. As Dr Kambeck added, “the roles make each party complete: both parties are interested to see the region politically stable and void of conflicts, hence the steps taken by each of the parties are directed to the above-mentioned objectives”.
Dr Kambeck talked also about the Armenia-Turkey rapprochement and its importance for the security dynamics in the region. The rapprochement happened without preconditions (the Nagorno-Karabakh conflict is not directly linked with the recent developments between Ankara and Yerevan). As he added, the situation would be improved if Turkey recognised the genocide of Armenians during the WWI in the Ottoman Turkey. In this context, he mentioned that the international community should express its support for Armenia in the rapprochement with Turkey. “This is exactly the moment when international community should support Armenia and show how important the process of rapprochement with Turkey is. And first of all, it should be clearly indicated that the process has its security implications for the whole region”, he added. The recent thaw will certainly help to re-evaluate security challenges and to create a new environment, which is in line with recent “reboot” of relationship between NATO and Russia. “If the parties manage to ratify the Armenian-Turkish protocols and establish diplomatic relations, and Turkey opens the border, it will be the first diplomatic solution [to political confrontations] in the South Caucasus after the collapse of the Soviet Union, and will become a signal for the whole region”, Dr Kambeck added.
In conclusion of his presentation, he stated that ensuring security and stability in South Caucasus from a multi-dimensional perspective is a key priority for both organisations, NATO as well as the EU.

Conclusion:
The European Union and NATO are both basing their actions in the region on strengthening the democracy, good governance and European values; moreover, they are acting in coordination with each other. However, they have different focuses: the EU acts more as a soft power (with its focus on economy, democracy building, civil society), whereas NATO is more interested in security issues.
Armenia’s desire to continue its cooperation with NATO and partnership with EU is obvious, and its strategic partnership with Russia does not put any obstacles to these activities. Armenia’s foreign policy priority is to continue in this direction – in terms of enhanced cooperation with NATO (of which Armenia’s future participation in the Afghanistan mission is an excellent example) and full integration into the EU. Furthermore, the Armenia-Turkey rapprochement will have positive implications for the whole region.