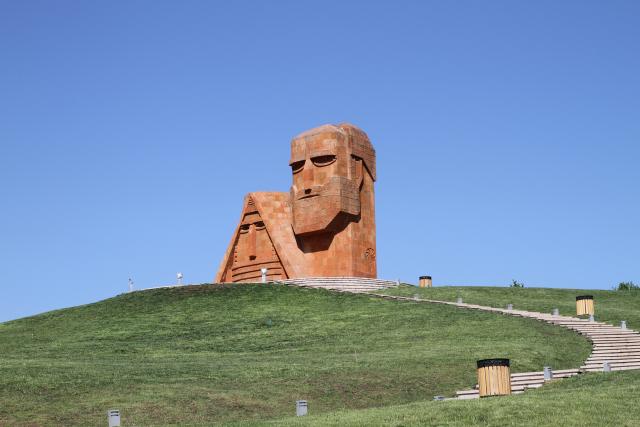 Diogo Pinto, EuFoA’s Director, six months after the Four Day War, which has taken away many people’s lives,  gives an overview of the Nagorno Karabakh conflict on euractiv.com.

Please find the text below:

The Nagorno-Karabakh conflict has come close to a resolution several times, but military action perpetrated by Azerbaijan, which left hundreds of casualties on both sides, has seriously undermined the peace process, writes Diogo Pinto.

Six months ago, Azerbaijan unleashed a large-scale, pre-planned aggression against Nagorno-Karabakh, during which gross violations of international humanitarian law were perpetrated, such as the indiscriminate shelling of civilian areas, and ISIS-style mutilation of bodies and beheadings.

Nagorno-Karabakh – historically a region of Armenia, inhabited by an overwhelming majority of Armenians – was arbitrarily annexed to Soviet Azerbaijan by Stalin in 1921. Seventy years later, on the eve of the dissolution of the Soviet Union, the people of Nagorno-Karabakh, in line with the then applicable Soviet legislation and international norms, voted in a referendum for an independent statehood.

Azerbaijan, in defiance of international law, its norms and principles, which, first of all, urge against resorting to the use of force, tried to suppress the aspirations of the people of Nagorno-Karabakh through violent means. These included massacres of Armenians living in the Azerbaijani cities of Sumgait, Kirovabad and Baku, and the expulsion of hundreds of thousands of them.

Nobel Peace Prize winner and famous human rights defender Andrei Sakharov, after whom the European Parliament Prize is named, denounced these facts as “a threat of a new genocide of the Armenian people”.

Azerbaijan then started a large-scale military offensive against Nagorno-Karabakh, committing new atrocities, including attacks against innocent children and women. The indiscriminate use of force, massacres, and ethnic cleansing perpetrated by Azerbaijan against the Armenian population during the war against Nagorno-Karabakh, stands as further evidences that its struggle for independence is existential and legitimate.

The hot phase of the conflict ended in May 1994, when Azerbaijan was forced to negotiate a truce and sign a cease-fire agreement with Nagorno-Karabakh and Armenia, further consolidated by new trilateral agreements signed in July 1994 and February 1995. The terms of these agreements haven’t expired and are still in force.

However, Azerbaijan regularly violates those agreements and, instead of engaging seriously in the negotiations process, concentrates its efforts on a military build-up: its military budget reached $4.8 billion (7.5% of GDP) in 2015, a 30-fold increase since 2003 when Ilham Aliyev succeeded his father as president.

Armenia, together with the mediating co-chairs of the OSCE Minsk Group (USA, France and Russia), exerts efforts for a peaceful settlement. Several times, the parties were close to a resolution, but, at the very last moment, Azerbaijan always took a step back.

The Nagorno-Karabakh conflict is not resolved yet because one of the negotiating parties, Azerbaijan, is not ready to go along with the proposal made by the mediators for the final settlement to be decided through a self-determination referendum, and strives, instead, to undermine the peace process.

For many years, the leadership of Azerbaijan has engaged in xenophobic and openly anti-Armenian hate speech. Baku frequently uses slogans such as “Armenians of the world are our enemies”, and an children’s textbook in Azerbaijani schools reads “Armenians are the generic enemies of the Turkic peoples”.

At the same time, a prominent Azerbaijani novelist was ostracised and persecuted for writing about the massacres of Armenians in Azerbaijan and for his calls for reconciliation, and many civil society representatives who engaged in people-to-people contacts with their counterparts in Nagorno-Karabakh and Armenia were put behind bars as “Armenian spies”.

Azerbaijan tries not only to mute the independent voices within the country, but also abroad: more than 100 foreign journalists have been included in the so-called “black list” just for visiting Nagorno-Karabakh and writing about it.

If there is one lesson we should have learned about conflict settlements, is that preparing the public for peace is crucial. This is what the co-chairs are continuously urging both sides to do, especially after the April escalation: building trust and confidence.

To restore trust in the peace process, measures should be taken to prevent the use of force and create conditions conducive to its advancement, and the EU is particularly well-equipped to ensure that such measures are in place as soon as they are needed.

Summits on Nagorno-Karabakh were held in Vienna in May, organised by the US Secretary of State, and then in St. Petersburg in June, hosted by the Russian President.

It is crucial to implement what was agreed upon in the framework of these summits: the full adherence to the 1994-1995 ceasefire agreements; the creation of a mechanism for investigation of cease-fire violations (which could serve as a preventive mechanism); and the expansion of the capacity of the Personal Representative of the OSCE Chairperson-in-Office, who monitors the cease-fire. Nagorno-Karabakh and Armenia accept this; Azerbaijan doesn’t.

The time has come for the EU to condemn, in very specific ways, the acts of aggression along the line of contact: the party that violates the cease-fire, rejects the confidence-building measures, and refuses the proposals of the mediators, must stand accountable. Instead, the usual “balanced” calls “on both sides” will only perpetuate impunity and encourage aggressive attitudes from Baku.

Years after the International Court of Justice considered, in relation to Kosovo, that general international law contains no applicable prohibition of declarations of independence; the time is now ripe for the EU to make clear to Azerbaijan that the only viable solution to the Nagorno-Karabakh conflict is through the ballot box, not bullet casings.