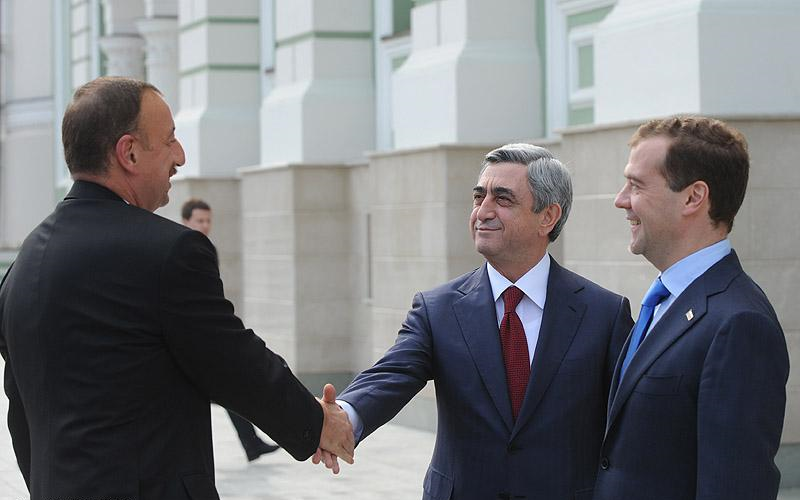 Hopes had been flying high ahead of the Kazan summit of 25 June, with the Minsk Group Co-Chairs repeatedly stating that the document for a solution of the Karabakh conflict now balances postulates of all parties to the conflict. However, despite the intensive pressure of the Co-Chairs, the Kazan summit did not offer the expected breakthrough.
“It was visible in Kazan and even before that Azerbaijan does not agree to the package of the Basic Principles proposed by the OSCE Minsk Group. Likewise, they refuse the withdrawal of snipers and any other measure leading to more stability and trust”, comments EuFoA Secretary General, Michael Kambeck. “Instead all that Azerbaijan communicates is that a new military escalation is not a question of IF, but of WHEN and HOW. Following Kazan and yesterday’s parade in Baku, the world must accept that rationality is no longer the right basis for our assessments. We must stop calling upon both sides, when there is visibly one side that first torpedoes every progress and then uses the lack thereof to justify war.”
During a military parade on Sunday, Azerbaijan displayed its newest offensive military equipment, including unmanned attack drones, which go beyond capacities of, for example, France or the UK. Azerbaijani President Aliyev used this occasion to repeat his war threats, saying that he is “completely sure that our territorial integrity will be resumed in any possible way”.
Commenting on Kazan, the OSCE Chairman in Office, Lithuanian Foreign Minister Ažubalis, said “I welcome the efforts in reaching common understanding on a number of issues whose resolution will help create the conditions for approval of the Basic Principles. I hope the work to address the outstanding issues will be continued, to pave the way towards resolving the conflict.” The OSCE Minsk Group is the only mandated format for mediating the negotiations for the Nagorno-Karabakh conflict and the Madrid Principles offer the only reliable path towards peaceful solution of the conflict. If Azerbaijan wants to continue growing its prosperity, military threats should stop immediately, which will make a breakthrough possible during the next summit, to take place during this summer.

EuFoA call:
Europe should prepare now and consider more options to deter from war and to incentivise peace. This way, a diplomatic breakthrough will become more likely.
Europe should stop the well intended “calls upon both sides” and instead name and shame each side for their contributions to the escalation. Otherwise, this invites for more escalation.
Europe should see that the arms race around Karabakh has produced a different situation compared to 1991, when the conflict parties mainly used leftovers from the USSR army. A new war today would most likely come with human losses and a geographic scope incomparable to 1991, or to the Georgian-Russian war in 2008.
Europe should realise that a new war would most likely come with sever damages to European investments in Azerbaijan’s oil and gas industry and to the energy supply from Azerbaijan at large, including consequent increases in worldwide crude prices.
Europe should read the Azerbaijani leadership’s statements and watch the Azerbaijani armament in order to understand that hostility against the Karabakhi population, which they do not consider their population but merely on their territory, is not some theory but Azerbaijan’s implemented state policy. This hostility is currently the key obstacle for a diplomatic solution.

Background on Kazan:
(based on reports from various sources close to the negotiations)
• The Azerbaijani President Aliyev suggested 10 last minute conditional amendments to the text, most of which the Foreign Ministers had been working on before and had already resolves or agreed to exclude.
• Armenia refused to re-open the box and the climate was “even if you now agree to some changes, Azerbaijan will present new last-minute conditions”.
• As a minimum but vital result, the parties agreed on a few details and to continue the trilateral negotiations still this summer.

Even the Sochi agreement of March 2011, to allow OSCE investigations into each incident on the line of contact, has so far not been implemented amid obstruction by Azerbaijan.

General background on the conflict:
For decades, the predominantly Armenian population in Karabakh has suffered under a discriminatory administration from Azerbaijan, to which their land was illegally allocated by Stalin in July 1921. When they tried to make use of the new rights offered by Glasnost and Perestroika and launched an independence bid, new repressions from Baku and defence measures from the Karabakhi population escalated into war. The first troops, artillery and tanks to enter Karabakh were Azerbaijani, which were fought back with Armenian support. The war ended in 1994 with the Bishkek Ceasefire which was negotiated by the OSCE Minsk Group and is open ended and binding under international law. Since then, the OSCE is seeking to broker agreements to allow for trust-building (e.g. sniper removal and OSCE investigations into sniper incidents) and peace (Madrid Principles).