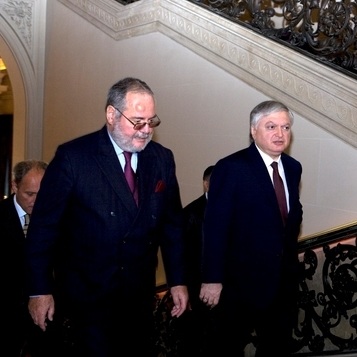 On August 31, Ramil Safarov, a lieutenant in the Azerbaijani military, who had been sentenced to life imprinsonment for killing an Armenian officer during NATO training in Hungary in 2004, was extradited on to Azerbaijan. On his return, he was immediately pardoned by the President, and received a new apartment, eight years of back pay, a promotion to the rank of major and the status of a national hero.

This issue has been – and continues to be – widely covered by international media, and is in the center of attention of many international organisations. Below, we provide you with articles and official statemenents on this topic.

Štefan Füle, European Commissioner for Enlargement and Neighbourhood Policy: “Let me express here today my deep concern and regret for the damage done, both to the peace process and to trust, by the pardon and glorification by some of the crime of Ramil Safarov.” (27 September 2012)

Statement by Androulla Vassiliou, Member of the EU Commission, on behalf of the European Commission and the European External Action Service (13 September 2012)

“Canada is concerned about recent developments in the Ramil Safarov case, in particular his pardon, and the unwelcome controversy it has generated.” (13 September 2012)

UN High Commissioner for Human Rights: “We are seriously concerned about the case of Ramil Safarov. (…) The murder was clearly ethnically motivated.” (7 September 2012)

“The UN Secretary-General is concerned about the developments surrounding the case of Mr. [Ramil] Safarov since his transfer on 31 August 2012 to Azerbaijan” (6 September 2012)

NATO Secretary General : “The act [Safarov] committed in 2004 was a terrible crime that should not be glorified.”(6 September 2012)

Statement by Mr Milan Cabrnoch, Chairman of the European Parliament Delegation to the EU-Armenia, EU-Azerbaijan and EU-Georgia Parliamentary Cooperation Committees on the case of Ramil Safarov (6 September 2012)

Czech Republic Ministry of Foreign Affairs: “[The Safarov-related steps] harm international efforts to strengthen the trust between the parties of Karabakh conflict, undermine the peace process and ultimately are very damaging for Azerbaijan.” (6 September 2012)

Elmar Brok, Chairman of the Foreign Affairs Committee of the European Parliament: “Azerbaijan: pardoning and glorification of Ramil Safarov” (5 September 2012)

Council of Europe Secretary General Jagland: “Making a hero out of a murder convict is unacceptable” (4 September 2012)

Press Statement by the US Department of State: “Pardon of Azerbaijani Soldier” (31 August 2012)

Azerbaijan used to mind what policymakers in Brussels and NATO thought. Now it does not.

Azerbaijan and Hungary both have serious questions to answer about the case of Ramil Safarov, an Azeri military officer attending a NATO-run English-language course in Budapest, who murdered a sleeping fellow-student with an axe in 2004. But the most unpleasant consequences are for Brussels and Washington, DC.

The victim was an Armenian officer called Gurgen Margarjan. Azeris did suffer abominable atrocities at Armenian hands during the war that finished with the 1994 ceasefire. As it happens, Armenians also suffered abominable atrocities at Azeri hands. Working out who behaved worst is tricky (though not impossible). Perhaps one day when the two countries are at peace, they will produce a common account of all the casualties of those terrible years.

Even if the two countries had been at war, Safarov’s behaviour would have been criminal. Killing an unarmed enemy combatant in his sleep, in cold blood, in a neutral country is wrong. And the real fighting has been over for a decade (though people still get killed in skirmishes on the ceasefire line). In short, murdering people is wrong whether they are from friendly countries or hostile ones.

The Hungarian authorities have not explained convincingly why they last month let Safarov – one of their country’s most controversial prisoners – go back to Azerbaijan. It is true that Azeri authorities requested this and that a Council of Europe framework for prisoner exchange permits it. But it does not mandate it. So the allegation that Hungary took this step in return for a large lump of Azeri money (some say €3 billion) deserves scrutiny.

The Azeri reaction in instantly pardoning Safarov, awarding him back pay and an apartment, and treating him like a national hero, is deplorable. Yes, Azeris feel that they are the victims of a clever propaganda campaign by the wily Armenians, in which their sufferings are ignored. Yes, some of the land now occupied by Armenia is not even part of the contested territory of Nagorno-Karabakh (which has historic Armenian roots). It was simply swiped.

But victimhood does not create moral legitimacy. How would Azerbaijan be reacting now if the murder had been the other way round? If Armenian hit squads were going round the world killing random Azeris? That would rightly be condemned (not least by Azeris) as cowardly, brutal and deserving criminal sanctions. Glorifying Safarov has made Azerbaijan look hysterical and morally suspect in world eyes. That is hardly a triumph for Azeri diplomacy. Hungary looks at best gullible and, at worst, greedy and deceitful.

But the big point is that both countries seem to think they can get away with their behaviour. The case illustrates the huge collapse in the moral authority of the EU and NATO since 2004. In preceding years, joining Western clubs was a matter of great pride for those newly admitted, and of great priority for those outside. They took care not to break the rules and (sincerely or not) to please international opinion.

Azerbaijan used to mind what policymakers in Brussels and NATO thought. Now it does not. It sees no realistic chance of membership in either organisation. It is bulging with oil money. It exploits cannily its useful geopolitical niche as a place to spy on (and perhaps bomb) Iran.

Hungary is not bulging with money. Indeed, its public finances feature gaping holes. But it too cocks a snook at Brussels (and Washington). Victor Orbán, the prime minister, makes his own decisions (often bad ones) and waits for the world to get used to them.

The knots that bound countries’ behaviour in Europe since the mid-1990s once seemed indestructible. Now they are fraying fast.

A Hero’s Welcome for a Convicted Killer Reignites Tensions

MOSCOW – Ramil Safarov stepped uncertainly off the plane in his native Azerbaijan last Friday, returning home after spending eight years in a Hungarian prison for a gruesome murder. But it took only a few minutes for the celebrations to begin. There was a pardon, a new apartment, eight years of back pay, a promotion to the rank of major and the status of a national hero.
Mr. Safarov, 35, was already famous because of his crime. Eight years ago, carrying an ax, he crept into a dormitory room in Hungary where an Armenian serviceman, a fellow student in a NATO-sponsored English class, slept, and nearly decapitated him.

But now Mr. Safarov will almost certainly go down in history for the way he was freed, an episode people have started to call “The Safarov Affair.”

The backlash has embarrassed Hungary, which agreed to extradite Mr. Safarov on the assumption that he would serve at least 25 years of a life sentence. It has set off protests in Budapest and enraged Armenia, where activists pelted the Hungarian Embassy with eggs and burned Hungarian flags.

And it threatens to end the lengthy peace process that has kept Azerbaijan and Armenia from sliding back into bloody conflict over the disputed territory of Nagorno-Karabakh. Mr. Safarov, who was a boy during the war with Armenia, embodies the hatred that has pooled deeply in the public as leaders have sat through rounds of faltering negotiations.

“If we have no process, what’s left is a vacuum, which gets filled with an escalation toward war; we’ll see how the Armenian side reacts, but that’s my fear,” said Thomas de Waal, a Caucasus specialist at the Carnegie Endowment for International Peace in Washington. “It’s suddenly more dangerous.”

Mr. Safarov, then a lieutenant, and his victim, Lt. Gurgen Markarian, got to know each other in Budapest as members of an English-language course organized by NATO’s Partnership for Peace, which was developed to build ties with former Soviet allies in Eastern Europe.

Mr. Safarov told the police that his Armenian classmates had insulted him and that he had grown increasingly angry, finally buying an ax and waiting until before dawn one day to carry out his plan. He passed those hours by finishing his English homework and taking a bath, according to a transcript of the interview published by Armenian activists.

After Mr. Safarov was arrested, Azerbaijan’s Foreign Ministry released a statement describing his family’s losses during the war with Armenia, and suggesting that Lieutenant Markarian had goaded him.

“There are indications that the Armenian servicemen repeatedly insulted the honor and dignity of the Azerbaijani officer and citizen,” the statement said. “All this would have inevitably influenced the suspect’s emotional state.”

Oil-rich Azerbaijan carried out a sustained lobbying effort to extradite Mr. Safarov from Hungary, over the protests of Armenian officials. The Hungarian government, under pressure to explain its decision to turn over Mr. Safarov, has said it received written assurance from Azerbaijan that he would not be paroled until he had served 25 years in Lieutenant Markarian’s murder.

On Friday, though, he was pardoned by Azerbaijan’s president, Illham H. Aliyev. Mr. Safarov’s presence so electrified citizens that all day strangers congratulated one another on the streets of Baku.

It is not clear how the Armenian government will respond to Mr. Safarov’s release. “The Armenians must not be underestimated,” President Serzh Sargsyan warned on Sunday. “We don’t want a war, but if we have to, we will fight and win,” he said. “We are not afraid of murderers, even those who enjoy the highest patronage.”

Richard Giragosian, an analyst based in Yerevan, Armenia, said that he doubted that either side was seeking a war, but that unfolding events risked “a war by accident.”

An Armenian opposition party on Tuesday proposed formally recognizing Nagorno-Karabakh as independent – a step that would signal the final collapse of peace talks that have long been encouraged by Russia and the West. Armenia could ratchet up the confrontation by opening an airport in Stepanakert, the capital of the disputed territory, or by responding overwhelmingly to cease-fire violations.

“Each side is escalating,” Mr. Giragosian said. “It’s almost like a matter of physics. For every action there is a reaction.”

Mr. Aliyev, Azerbaijan’s president, has invested vast sums in his country’s international standing, most recently serving as host of the Eurovision Song Contest, but waves of condemnation have emerged since Friday – most swiftly from the United States, which issued statements saying officials in Washington were “extremely troubled” and “deeply concerned.” On Monday, Russia’s Foreign Ministry expressed “deep concern, noting the case’s “extreme atrocity.”

Zerdusht Alizadeh, an opposition politician and analyst at the Helsinki Citizens’ Assembly, said Mr. Aliyev was looking ahead to elections next year, and had little to show for the drawn-out efforts to mediate the conflict in Nagorno-Karabakh. Mr. Safarov’s homecoming, he said, was a far simpler way to declare victory.

“Giving so much support to a hero – a person who killed an Armenian – makes the president a hero, too,” he said.

By Tuesday, though, the backlash was dominating the day’s news coverage, and Mr. Safarov had made no further public appearances.

The episode, Mr. Giragosian said, was a reminder of the depth and force of the ethnic grievances left behind as the Soviet empire receded across Europe.

“It’s almost like the Balkans was – we had no idea of the barbarity of these people,” he said. “Holding a grudge for 100 years is nothing. It’s like a blood vendetta. At the same time, there are wider implications; it increases an already worrisome trend toward possible renewed conflict here.”