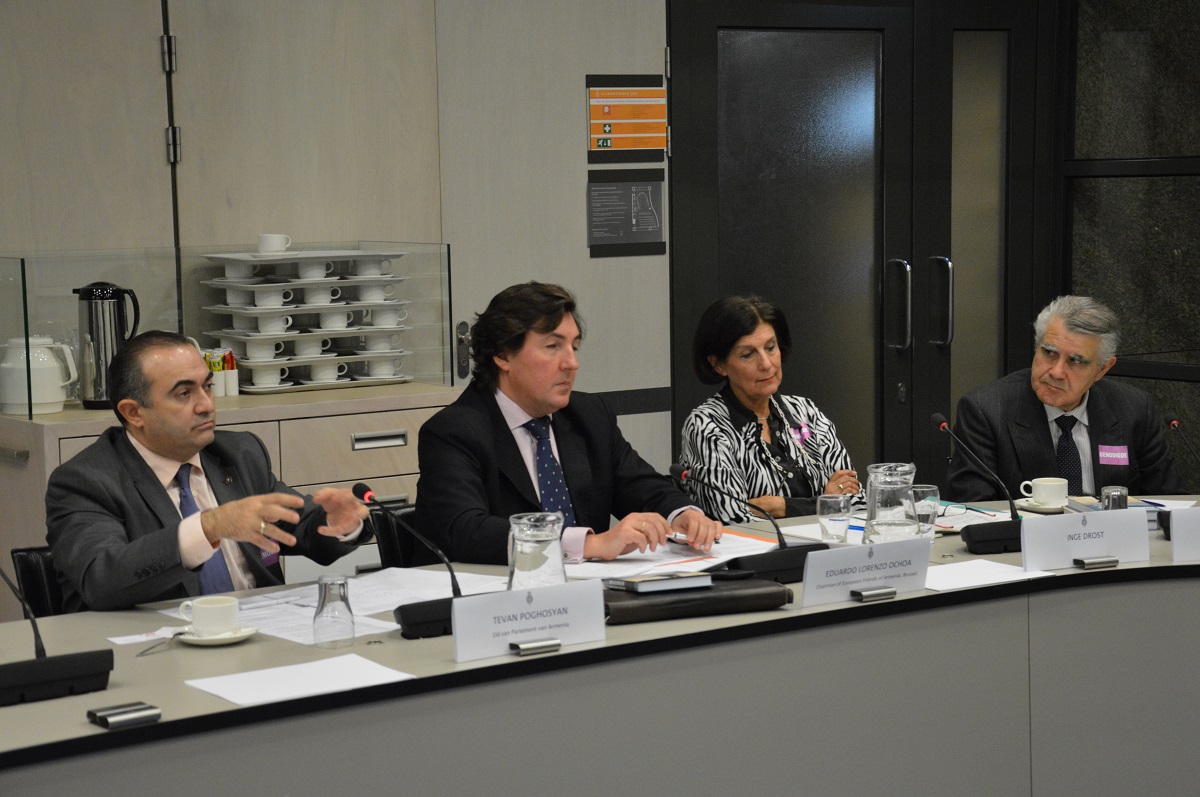 European Friends of Armenia was part of a delegation which participated in a Dutch parliament hearing about Nagorno-Karabakh and the recent increase of violence along the Armenia-Azerbaijan border. The hearing was organized by the Dutch parliamentarian Pieter Omtzigt and was attended by Dutch politicians.

Mr Omtzigt invited a FAON delegation (Federation of Armenian Organisations in The Netherlands) to this hearing following a letter FAON had sent concerning recent violent escalations. The delegation was composed of Inge Drost and Mato Hakhverdian (FAON), the Armenian MP Tevan Poghosyan and Eduardo Lorenzo Ochoa (European Friends of Armenia).

The hearing comes after recent escalations along the border between Armenia and Azerbaijan. In September three Armenian women were killed when the Azerbaijani army shelled villages along the border. In addition, regular breaches of the ceasefire have occurred on the line of contact between Nagorno-Karabakh and Azerbaijan. What is also worrying for the international community is that weapons of higher calibre, such as mortars, are increasingly used.

‘It is very important for us as European Friends of Armenia to contribute to this hearing and we are very grateful to FAON for giving us this opportunity’ he said ‘National parliaments and their members can play an important role and their support for a peaceful resolution to this question is much needed. In any case we hope that the Dutch parliament will support measures which will end ceasefire violations. I am sure this will be much appreciated by the people of Nagorno-Karabakh.’

The Armenian parliamentarian Mr Tevan Poghosyan briefed the audience about the current situation in Nagorno-Karabakh and along the Armenia-Azerbaijan border. He emphasized that the participation of Nagorno Karabakh representatives in the negotiation process is essential for the settlement of the conflict.

‘The international should firmly speak out against ceasefire violations and condemn the culprit.’ he said. ‘Biased resolutions from, for example, PACE have are harmful for the peaceful of the conflict. There I am happy to raise awareness amongst Dutch parliamentarians and we hope that they further support the further democratic process in the Nagorno-Karabakh Republic.

FAON has throughout the years been very active in approaching Dutch politicians and brining Armenia and Nagorno-Karabakh to their attention. Present In the audience was the Dutch MP Harry van Bommel who himself has travelled to Armenia. Both he and Mr Omtzigt asked the FAON delegation how the Dutch parliament could contribute to lasting peace in Nagorno-Karabakh.