EuFoA Director Diogo Pinto speaking at the ‘European Union & Armenia: Relations and the Way Ahead’ conference in Yerevan 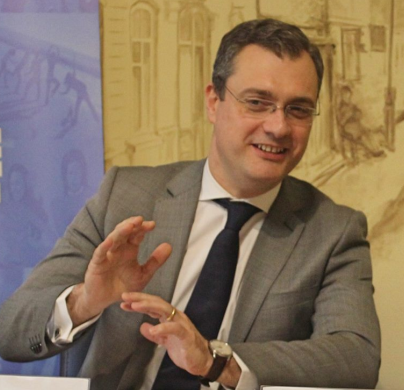 On 31 May, 2017, EuFoA Director Diogo Pinto participated as a speaker in the Panel ‘The Economic, Trade, Education and Cultural Components of the future EU-Armenia Legal Basis’ of the conference ‘European Union & Armenia: Relations and the Way Ahead’ (Yerevan, Armenia), organised by the Analytical Centre on Globalisation and Regional Cooperation (ACGR), with the support of the Friedrich Naumann Foundation for Freedom in South Caucasus.

In his speech, Mr. Pinto underlined the importance of the new Comprehensive and Enhanced Partnership Agreement (CEPA), formally initialled by EU and Armenia on 21 March 2017. The CEPA could become a part of a broader strategy the EU should develop for creating an area of peace, prosperity and democracy in all parts of the Eastern Partnership (EaP), he stressed. Mr. Pinto acknowledged difficulties in creating a unified approach to a region which is home to countries actively working on internal democratisation, such as Georgia and Armenia, and those embracing dictatorial practices, such as Belarus and, increasingly, Azerbaijan.

EuFoA Director also affirmed the importance of the “more-for-more” principle in dealing with the countries of the region, expressing the correlation between the EU’s ambition in a country and their reform agendas, emphasising the differences between the EaP and the enlargement countries.

Mr Pinto concluded by complimenting the EU and Armenia for their ambitious attitude towards the agreement, asserting expectations of a truly enhanced cooperation, which will strengthen political dialogue between Armenia and the EU and set a solid basis for a new era of growth and prosperity.

Once implemented, the agreement will set up the legal framework for stronger and closer cooperation in several sectors, such as transport, energy and the environment, for increased mobility of Armenian citizens in Europe, and for new opportunities in trade and investments. In those respects, a substantial progress in negotiating Common Aviation Area agreement and opening of visa liberalisation talks would be important steps.