EU Engagement could contribute to lasting peace in Nagorno-Karabakh 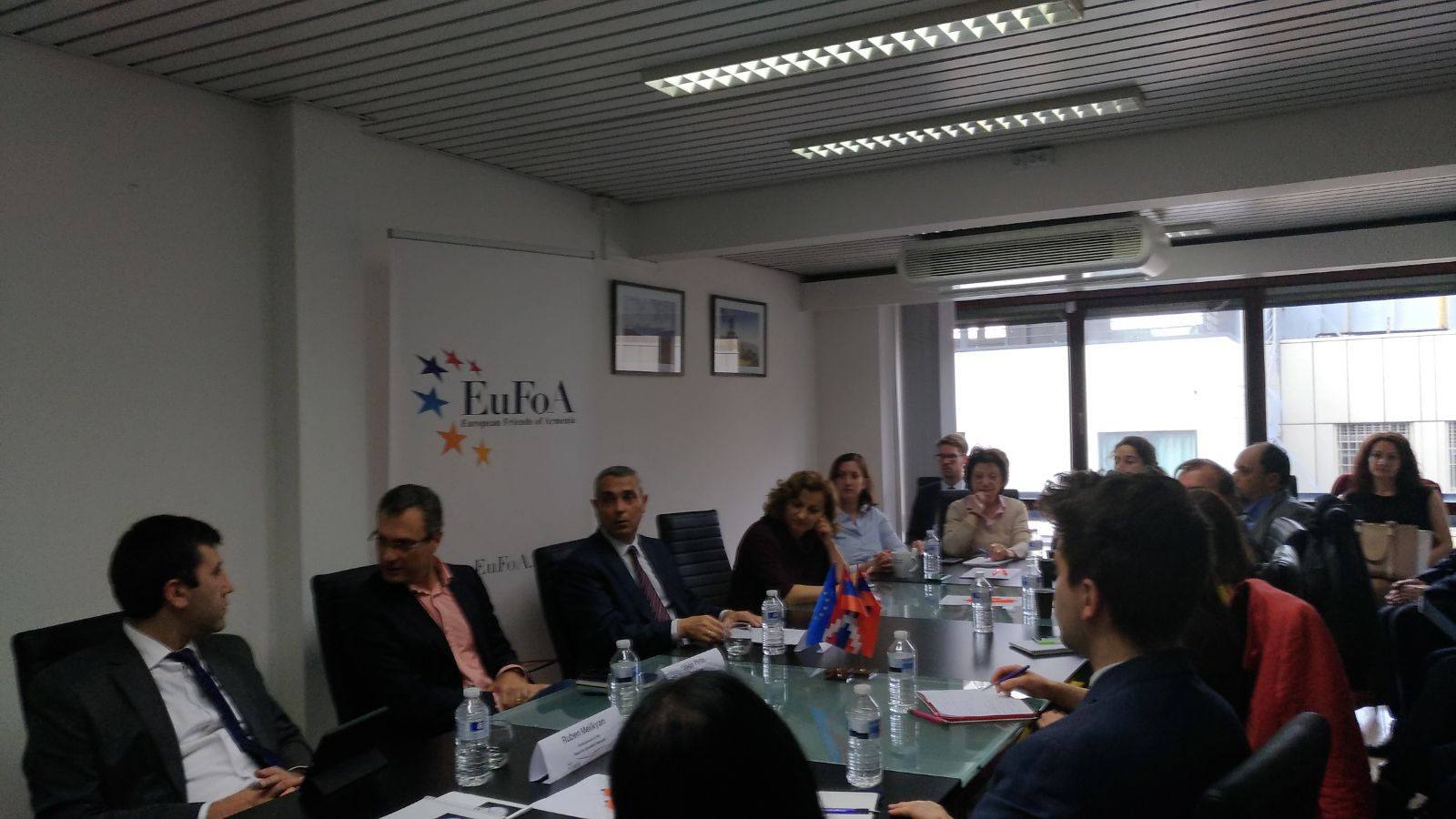 BRUSSELS, 20 October 2017 – This morning, European Friends of Armenia (EuFoA) organised a comprehensive briefing on Nagorno-Karabakh, with the newly appointed Minister of Foreign Affairs of the Nagorno-Karabakh Republic, Masis Mayilian, and Ombudsman Ruben Melikyan.

This briefing was moderated by Diogo Pinto, Director of EuFoA, and attended by more than 30 representatives of the EU institutions, diplomatic corps, international NGOs, research community and media.

Mr Pinto thanked and welcomed the speakers and the participants, and reminded that, in Brussels, it is quite a unique opportunity to talk about Nagorno-Karabakh and the conflict with representatives from Nagorno-Karabakh proper. Mr Mayilian, in his initial remarks, gave an extensive account of the latest developments in the process of democratic consolidation of Artsakh (Nagorno-Karabakh), stressing its openness to cooperate with other states and international organisations, and left an invitation for the EU to consider further engaging with Artsakh in areas such as strengthening civil society, independence of the media, and humanitarian issues. He added: “EU cooperation with Artsakh would play a stabilizing role and become an important contribution to establishing lasting peace in the South Caucasus, and it would signal the inadmissibility of using confrontation and isolation as a means of resolving conflicts. The promotion of human rights and fundamental freedoms should not fall hostage to the unresolved Azerbaijani-Karabakh conflict, and the unrecognised status of Artsakh should not serve as an obstacle to the cooperation between Artsakh and the European Union.”

Mr Melikyan started by stating that human rights are recognised in Artsakh as a fundamental aspect of its statehood, and efforts are constantly being made to promote and uphold them, as well as to educate people and i nstitutions about them. The most recent evidence of this was the announcement by the President that, as part of his programme for this term, a Human Rights Strategy and Action Plan will be developed. The Ombudsman also referred to the report already published about the violations of human rights committed by the Azerbaijani forces against civilians in Nagorno-Karabakh during the April 2016 war, and the upcoming report about “Armenophobia” in Azerbaijan. He concluded by stating that “xenophobia is always unacceptable”.

During the debate that followed, participants touched on several diverse aspects related to Nagorno-Karabakh, the conflict and the situation of human rights, including but not limited to: status of negotiations, peace building projects, and prospects for conflict resolution; relations with and the role of the EU, expectations towards the upcoming Eastern Partnership Summit and the new “CEPA” agreement between Armenia and the EU; freedom and pluralism of the media and freedom of expression; role and situation of women and youth; economic situation, etc.

Mr Pinto, speaking after the briefing, expressed that: “This was a successful event, and I am happy to see that it attracted the interest of so many people. Artsakh exists beyond the conflict, and its reality needs to be better known, and the isolation promoted by Azerbaijan needs to be broken. The conflict can only be solved with the direct involvement of the representatives of the people of Artsakh in the negotiations, and the EU could play an important role in promoting this by engaging further with the territory and its inhabitants”.