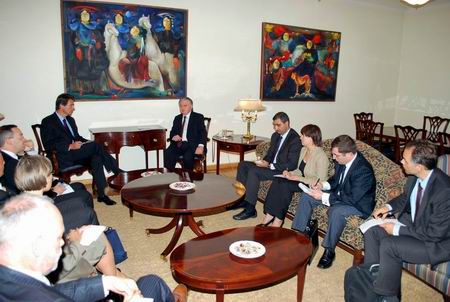 A particular focus was the implementation of the European Neighbourhood Policy and the Eastern Partnership initiative, to which both sides confirmed their commitment. The EU pledged an additional €100 million to assist Armenia in dealing with the consequences of the world economic crisis.

The delegation also welcomed the recent progress in Armenia-Turkey relations and discussed the current state of the negotiations on the Nagorno-Karabagh conflict. The committee commended Armenia’s progress in the area of human rights and an agreement on the establishment of an EU-Armenia dialogue on human rights was reached.

Below we provide you with articles from Public Radio of Armenia, Aysor and News.am.

The Tenth Cooperation Committee meeting was chaired by the Minister of the Economy of RA, Mr. Nerses Yeritsyan, from the Armenian side and from the EU side by Mr. Gunnar Wiegand, Director for East Europe, DG RELEX, Ms. Ewa Synowiec, Director for bilateral relations with Europe (non EU) and Central Asia, DG Trade of the European Commission, and Mr. Johan Frisell, the Director of Eastern Europe Division of the Swedish Foreign Ministry, representing the EU Presidency.

During the meeting both sides held discussions on the implementation of the RA-EU European Neighbourhood Policy Action Plan, issues connected with enhancing of RA-EU relations within the framework of the Eastern Partnership, including prospects for the establishment of a deep and comprehensive free trade area. The agenda included also issues related to rule of law, democracy and governance, human rights and fundamental freedoms, the resolution of the Nagorno Karabakh conflict, Armenian-Turkish relations, EU assistance and cooperation, including regional cooperation, and additional points on cooperation with the EU Advisory Group.

Delegation of the European Commission in Armenia

The Minister mentioned that the relations with the EU are primary for Armenia and Armenia is willing to develop the mutual cooperation with EU. They have had a detailed discussion about the Armenia – EU cooperation. They have discussed also issues concerning the realization of the EU “Eastern Partnership” program. In this context the Foreign Minister of Armenia has stressed this new format of cooperation has a great potential and Armenia is tend to take part in the program actively.

Gunnar Wiegand presented to Edvard Nalbandian the results of the 10th session of the EU cooperation committee. The two have discussed the ways of easing the procedure of receiving license and the activities undertaken for signing the free trade agreement. Gunnar Wiegand has informed that a decision has been accepted to present a project of signing an agreement of association with other countries of Southern Caucasus. Edvard Nalbandian has highly appreciated the work of the group of the EU advisers in Armenia, and has hoped that that project will influence the realization of the improvements in the legislative, executive and judicial systems.

By the request of the guests Minister Nalbandian has presented the process of regulation of Armenian – Turkish relations, as well as the last developments of Artsakh issue.

The parties discussed the issues of Armenia-EU action plan details, as well as the prospects of political cooperation within the framework of European Neighborhood Policy, RA National Security Council Press Service informed NEWS.am. Gunnar Wiegand expressed content with the process of program implementation and emphasized the EU Advisory Group activities in Armenia. The sides outlined the necessity of hastening the process of establishing EU information centers in Armenia. Artur Baghdasaryan touched upon the facilitation of visa restrictions with EU member states. Wiegand expressed the EU readiness to support the procedure. According to Baghdasaryan, working group headed by RA Deputy Foreign Minister was formed, that will undertake the elaboration of the relative agreements.

The officials also spoke of the Armenia-Turkey reconciliation and NKR conflict settlement within the context of the regional security strengthening.