EU-Armenia relations in the CEPA era: What’s Next? 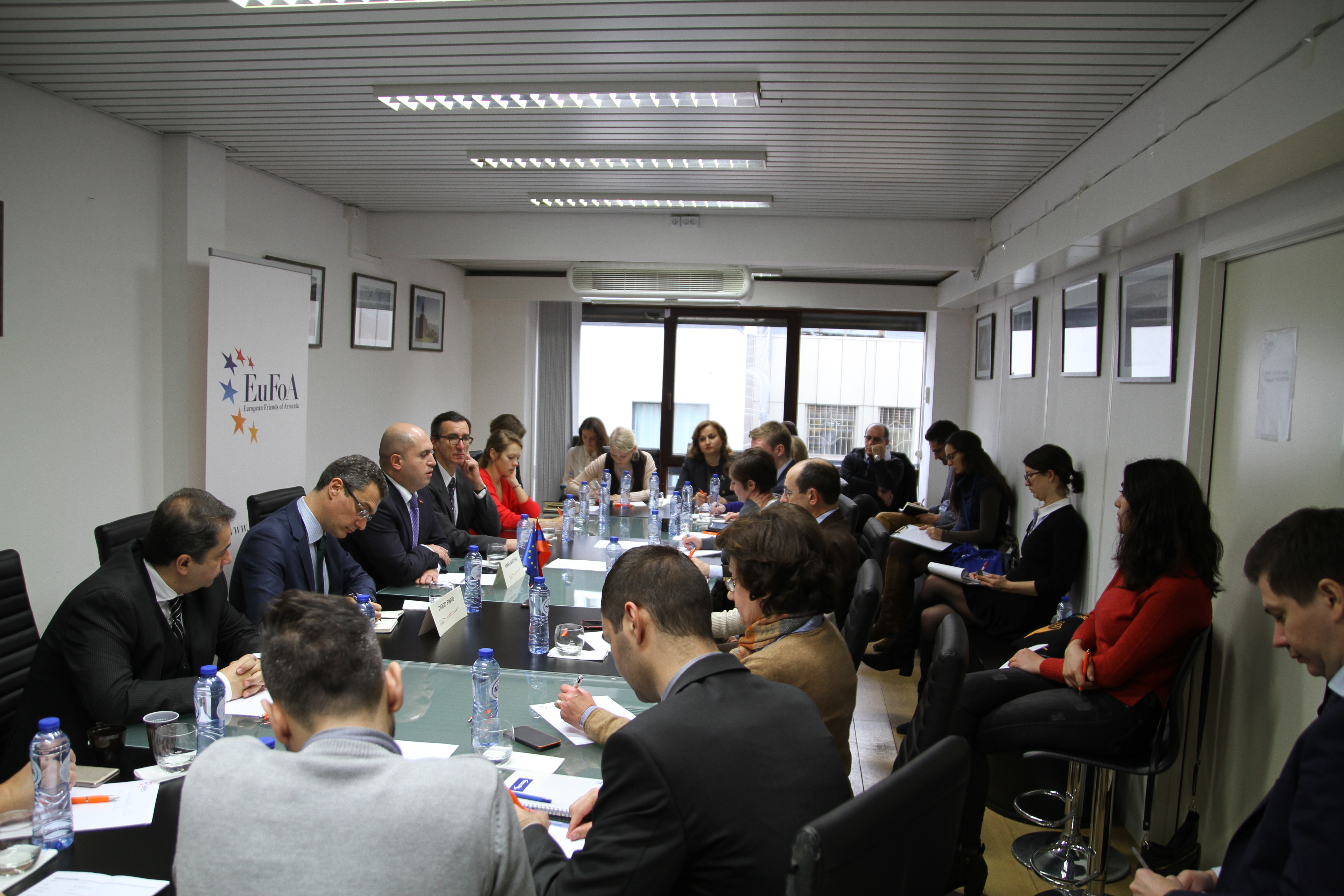 On 5 December 2017, in its office in Brussels, European Friends of Armenia hosted an exclusive briefing on EU-Armenia relations with Armen Ashotyan, Chair of the Standing Committee on Foreign Affairs of the National Assembly of the Republic of Armenia, and Head of the Armenian delegations to the EU-Armenia Parliamentary Cooperation Committee and the Parliamentary Assembly of the Eastern Partnership (Euronest).

This event, which took place against the background of the recent Eastern Partnership Summit and the signing of the new EU-Armenia Comprehensive and Enhanced Partnership Agreement (CEPA), was moderated by Diogo Pinto, Director of EuFoA, and attended by more than 30 participants, representing EU institutions, diplomatic missions, international NGOs, think tanks and the media. In his initial remarks, Mr Ashotyan pointed out that the new EU-Armenia CEPA was the main visible success of the Eastern Partnership Summit, held in Brussels on 24 November, and reminded the audience that this is the first agreement of this kind signed by the EU with a member-state of the Eurasian Economic Union. As such, the economic and trade pillar of CEPA accommodates Armenia’s commitments and limitations as a member of a different common market, thus falling short of establishing free-trade between Armenia and the European Union. On the other hand, the provisions in the political pillar of CEPA are very much equivalent to those of the association agreements signed by the EU with Georgia, Moldova or Ukraine.

In Mr Ashotyan’s opinion, this corresponds perfectly to the most pressing expectations of Armenia towards the EU, namely support (not exclusively financial) for the important reforms the country has engaged in with regard to further democratisation, enhancement of the rule of law, and protection of human and civil rights of the Armenian population. Mr Ashotyan concluded his speech by pleading for a quick ratification of CEPA by the EU – hopefully before the 2019 European Parliament elections-, and making the case for a visa liberalisation dialogue to start immediately, as they both would send a positive message and lead to quick and tangible results for Armenian citizens.

The discussion that followed touched upon the enforcement of the agreement, the full implementation of which will require the ratification of all 28 EU member states and the European Parliament, while, from its side, Armenia will have to continue carrying out reforms for its institutional standards and legislation to approximate those of the EU.

Concluding the event, EuFoA Director Diogo Pinto expressed his gratitude to both the speaker and the participants for helping EuFoA accomplishing its objective of building bridges between Armenia and the EU: “In 2018, as we did this year and previously, EuFoA will keep pursuing its mission by being a platform for dialogue between all relevant Armenian and European political actors, and we invite you all to keep attending our events”, he said.