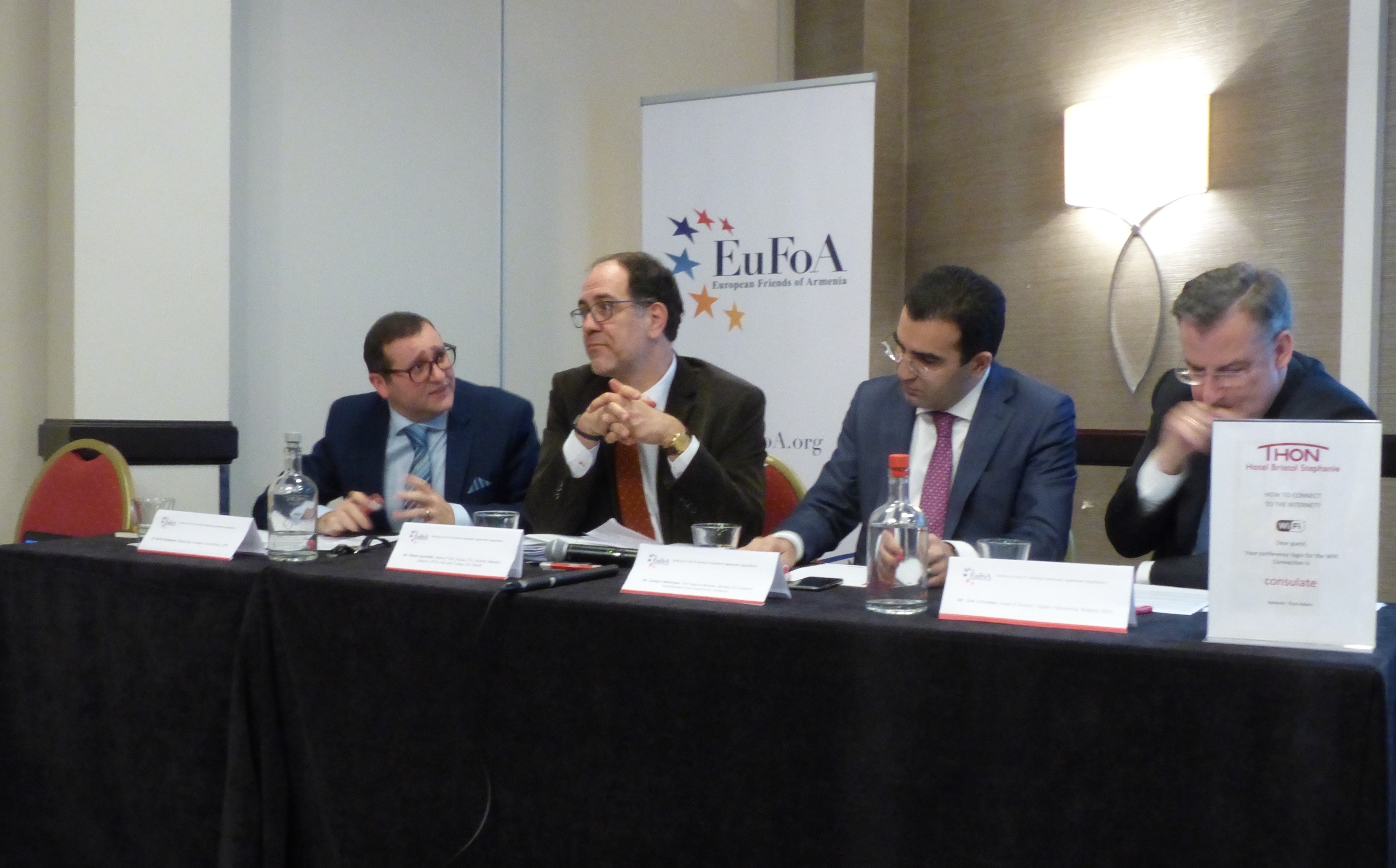 On 14 December, the European Friends of Armenia organised a Briefing to assess the current state of the play in the EU-Armenia framework agreement negotiations, one year into the process.

Garegin Melkonyan, First Deputy Minister at the Ministry of Economic Development and Investments of the Republic of Armenia, Dirk Schuebel, (EEAS) and Petros Sourmelis (DG TRADE) were the speakers at the Briefing, which was moderated by Dr Hrant Kostanyan, Researcher at CEPS – Centre for European Political Studies, and attended by more than 40 participants.

Mr Schuebel, Head of Division “Eastern partnership bilateral”, kicked-off the discussion, speaking about the political aspects of the negotiations: “I am very happy to see that Armenia is very ambitious in these negotiations, and positively surprised to see how much of the previously negotiated Association Agreement we will be able to keep”, he said. Mr Schuebel warned, however, “it is up to Armenia to decide how much of the EU acquits it is prepared to adopt”.

Mr Sourmelis, Head of Unit “Russia, CIS, Ukraine, Western Balkans, EFTA, EEA and Turkey”, spoke next. He confirmed that a positive atmosphere and quick progresses can also be observed in the “trade and investment” track of the negotiations and stated: “The new agreement will be closer to the defunct DCFTA (Deep and Comprehensive Free Trade Agreement) than to the existing PCA (Partnership and Cooperation Agreement); but the toughest issues are the ones left to the end”.

Mr Melkonyan was the last of the three speakers to take the floor. He explained that since this is not a Free Trade Agreement, total trade liberalization is not to be expected, but added that the new agreement will likely contemplate some tariff reductions. As for the timeline of the negotiations, Mr Melkonyan said: “We are more concerned about the substance, rather than the timeline. For us, the most important is to reach a good final outcome, and position Armenia as an ideal investment destination, with a strong and stable political, economic and administrative environment, and an easy access to markets such as the EU’s, the EEU’s and Iran’s”.

Answering questions from the audience, Mr Schuebel stated that, given the first signs of a successful implementation of the visa facilitation and the readmission agreements, the EEAS stands ready to start a dialogue with Armenia towards a Visa Liberalisation Action Plan. However, he also stressed that the Council must authorize such a mandate, and some Member States seem reluctant to do so at this stage, for reasons not directly related to Armenia.

While stressing that this is a bilateral agreement with Armenia, and therefore specific to Armenia, Mr Sourmelis added that it could somehow become a kind of a “blueprint” for future agreements with other EEU members, such as, for instance, Belarus. The panelists reminded, however, that the situation of Human Rights in Belarus does not allow the EU to envisage starting negotiations any time soon.

Mr Melkonyan closed the debate affirming that although Armenia has commitments and responsibilities stemming from other integration processes as well, “these negotiations showcase Armenia’s devotion to the EU, which has been, is, and will probably remain our main trading partner”.

Diogo Pinto, Director of the European Friends of Armenia, speaking after the Briefing, said: “This was a successful event, and I am happy to see that it attracted the interest of so many people. Even more importantly, this evening we heard many very positive things about the progresses already made in the negotiations between Armenia and the EU. I am confident that the ambition and the constructive approach shown by the two sides will allow for a very positive conclusion of the negotiations, and that the new EU-Armenia framework agreement will soon be signed. This is great news for EuFoA and all the European friends of Armenia, but also for Armenia and the EU too”.