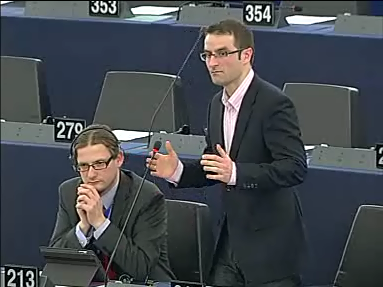 On 18 April 2012, the European Parliament (EP) adopted two resolutions in the context of the negotiations for the new Association Agreements with Armenia and with Azerbaijan. European Friends of Armenia hails that the EP prevailed its core values for the Eastern Partnership, especially on a continued democratisation and a balanced approach to the Nagorno-Karabakh conflict. The report is particularly supportive for Armenia but also reminds of the remaining homework. Below we provide a summary of the most relevant points.

“The reports are very supportive and they also contain some new positive aspects for Armenia. The EP clearly acknowledges that Armenia has become more European and calls for more EU assistance for this process.” comments EuFoA Secretary General Dr Michael Kambeck.

On Nagorno-Karabakh, the EP strongly supports ALL points of the Minsk Group’s Madrid Principles as a package, including for the first time explicitly “international security guarantees that would include a genuine multinational peacekeeping operation in order to create suitable conditions for the future legally-binding free expression of will concerning the final status of Nagorno-Karabakh”. Referring to Nagorno-Karabakh, MEP Dr Andrey Kovatchev, member of the Europe-Armenia Advisory Council, said in the Plenary that “it can only be resolved by peaceful means within the framework of international law and in accordance with the principles agreed in the Minsk Group. The stronger role of the EU in the region requires us to be cautious and correct in our assessments so that we should not be like a ball in a china shop, and instead of helping to achieve a mutually acceptable solution to the conflict [we might] actually make it more difficult.” On the same issue, Kambeck remarks that “the EP again fully supports the OSCE Minsk Group efforts and defended this balanced position against an unprecedented lobbying campaign from Azerbaijan. I am glad that, once the MEPs looked into the issues more closely, they recognised the traps. Many MEPs felt that this was very inappropriate.”

EuFoA is an NGO working for good relations between the EU and Armenia and does not act against any country or stakeholder. Keeping this stance, we merely invite interested journalists and researchers to speak to MEPs and to acquire more information about this phenomenon. Further sources are provided below. Finally, we believe that attacking the Minsk Group or trying to single out one country’s favourite aspects of the proposed peace deal could never serve peace or the people of Azerbaijan. To allow for peace and the return of refugees and IDPs, the EP resolution now maintains that ALL aspects of the Minsk Group proposal should be implemented as a package, plus confidence building measures like the withdrawal of snipers, the installation of more observers and more humanitarian work in Karabakh. This approach is good for Armenia, for Azerbaijan and the entire region.

Inappropriate forms of Azerbaijani lobbying are increasingly being investigated by journalists around Europe:
“Azerbaijan Seeks to Burnish Image Ahead of Eurovision” (1 April 2012, http://www.spiegel.de/international/world/0,1518,806769,00.html)
“Questions over MPs’ all-expense-paid trip to Azerbaijan” (29 August 2011, http://www.thebureauinvestigates.com/2011/08/29/questions-over-mps-all-expense-paid-trip-to-azerbaijan/)
“Lover and aide claims MP Mike Hancock urged lobby group to pay her” (18 November 2011, http://www.thebureauinvestigates.com/2011/11/18/mike-hancock-urged-lobby-group-to-pay-lover-aide-claims/)
“Tory MP on intelligence committee is paid by Azerbaijan lobby group” (5 October 2011, http://www.guardian.co.uk/politics/2011/oct/05/tory-mp-intelligence-committee-azerbaijan)
Excerpts of the European Parliament Resolution:
[Report by Tomasz Piotr Poreba, adopted on 18 April 2012, title “European Parliament’s recommendations to the Council, the Commission and the European External Action Service on the negotiations of the EU-Armenia Association Agreement”]. Please click here to read the text of the resolution.

Please click here to read the text of the resolution.