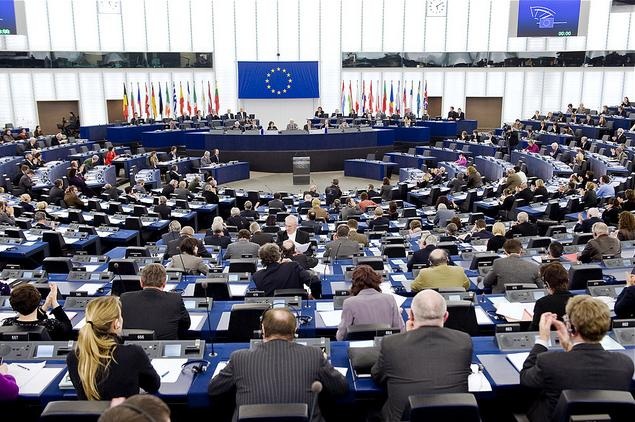 On Thursday 13 September, the European Parliament has adopted an urgency resolution on the Safarov affair, adding its voice to the long list of international organisations and national governements, condemning Azerbaijan for releasing Safarov. There has been over 20 statements published so far – to consult the full list, please click here.

“We strongly welcome the resolution of the European Parliament on the Safarov case. The Parliament clearly sent the right signal to Azerbaijan and defended European values in this case”, comments Michael Kambeck, EuFoA’s Secretary General. “In our own work with the Parliament, we saw that there was a very intensive Azerbaijani lobbying campaign, trying to justify this case of state-promoted xenophobia by spreading false versions of the Garabedian story, by claiming that it is Armenia who is threatening Azerbaijan with war and Armenia who is blocking the Minsk Group. But this convinced almost nobody. Their multi-million dollar lobbying machine has visibly become the sinking ship of a very aggressive authoritarian regime and by now even the pro-Azeri forces are leaving that sinking ship to protect themselves. We thank the European institutions and especially the European Parliament for their strong support and underline that Armenia should keep its constructive course in this and all similar cases.” added Kambeck.

Statement by Androulla Vassiliou, Member of the EU Commission on behalf of the European Commission and the European External Action Service, presented during the debate on the resolution
“Mr President, honourable Members, I welcome your initiative to raise the issue of Mr Safarov’s extradition and pardoning. I am fully aware of the very strong reactions prompted by this development, not only in Armenia but also far beyond.

Ramil Safarov was sentenced in Hungary to life imprisonment for the brutal murder of Gurgen Margaryan, an Armenian officer and fellow NATO course participant. From our contacts with the Hungarian authorities, I understand that the decision to extradite Mr Safarov was based upon written assurances received from the Azerbaijani Government that Mr Safarov would serve the remaining part of his life sentence there.

The subsequent Azerbaijani decisions, including the pardoning of Mr Safarov and steps which have widely been seen as rewarding his crime, are deeply regrettable. The handling of this case has the potential to further complicate the peaceful settlement of the Nagorno-Karabakh conflict, as well as – potentially – the Eastern Partnership agenda.

Despite this setback – and I think we cannot pretend that it is otherwise – the EU remains committed to, and persistent in, its support to the Nagorno-Karabakh conflict settlement process in the framework of the Minsk Group. The EU does not see – and would absolutely reject – any alternative to peaceful conflict settlement. The Safarov case should not be used by anyone to deviate from this.

Intense contacts with all actors to establish the situation have been deployed by the EU, and there was a good discussion on this at the informal Foreign Ministers’ meeting last weekend in Cyprus. Moreover, Baroness Ashton has instructed the EU Special Representative for the South Caucasus and the crisis in Georgia to visit Yerevan and Baku and convey our messages, which he is doing as we speak.

Last but not least, there is also a lesson for the Eastern Partnership, in which both Armenia and Azerbaijan participate. Without a community of values, without the rule of law and respect for human rights and commitments taken, there can be no reconciliation or peace. In this respect, the implementation of the Eastern Partnership Roadmap becomes a key element for regional stability.

More than ever, our efforts in support of peace in the region are needed. The Commission welcomes President Schulz’s statement and the European Parliament’s commitment in focusing the attention of partners on this objective.”

Below, please find the full text of the EP’s resolution. Please click here to download the resolution in PDF format.

– having regard to its previous resolutions on the situation in Azerbaijan, in particular those concerning human rights,

– having regard to the established practice of international law regarding transfer, namely the Convention on the Transfer of Sentenced Persons, under which it was agreed that cooperation should be developed in order to further the ends of justice and the social rehabilitation of sentenced persons, by giving them the opportunity to serve their sentences within their own society,

– having regard to the statement issued by its President, Martin Schulz, on 5 September 2012 concerning the pardon granted to Ramil Safarov in Azerbaijan,

– having regard to the joint statement issued by the High Representative of the Union for Foreign Affairs and Security Policy, Catherine Ashton, and Commissioner Štefan Füle on 3 September 2012 concerning the release of Mr Safarov,

– having regard to the statement issued by the Secretary-General of the Council of Europe, Thorbjørn Jagland, on 4 September 2012,

– having regard to the official letter received by the Ministry of Public Administration and Justice of Hungary on 15 August 2012 from the Deputy Minister of Justice of the Republic of Azerbaijan, Vilayat Zahirov,

– having regard to its resolution of 18 April 2012 on the negotiations of the EU-Azerbaijan Association Agreement,

– having regard to the statement issued by the Hungarian Prime Minister, Viktor Orbán, on 3 September 2012, in which he gave an assurance that Hungary had acted in accordance with its international obligations,

– having regard to the Partnership and Cooperation Agreement between the EU and Azerbaijan, which entered into force in 1999, and to the ongoing negotiations between the two parties on a new association agreement to replace the previous one,

A. whereas Ramil Safarov had been jailed in a Hungarian prison since 2004 after brutally killing an Armenian colleague during a course sponsored by NATO’s Partnership for Peace Programme in Budapest; whereas Mr Safarov had pleaded guilty and had expressed no remorse, defending his action on the grounds that the victim was Armenian;

C. whereas immediately after Mr Safarov was transferred to Azerbaijan the Azerbaijani President, Ilham Aliyev, pardoned him in line with the Constitution of the Republic of Azerbaijan and Article 12 of the Convention on the Transfer of Sentenced Persons;

D. whereas Article 9 of the Convention on the Transfer of Sentenced Persons, to which Hungary and Azerbaijan are both signatory parties, states that a person sentenced in the territory of one state may be transferred to the territory of another in order to serve the sentence imposed on him or her, provided that the conditions laid down in that convention are met;

E. whereas the Deputy Minister of Justice of the Republic of Azerbaijan, Vilayat Zahirov, sent an official letter to the Ministry of Public Administration and Justice of Hungary on 15 August 2012, in which he stated that the execution of the decisions of foreign states’ courts regarding the transfer of sentenced persons to serve the remaining part of their prison sentences in the Republic of Azerbaijan were carried out in accordance with Article 9(1)(a) of the convention, without any conversion of their sentences; whereas he further gave an assurance that, according to the Criminal Code of the Republic of Azerbaijan, the punishment of a convict serving a life sentence could only be replaced by a court with a term of imprisonment for a specified period, and that the convict could be released on conditional parole only after serving at least 25 years of his or her prison sentence; and whereas the Azerbaijani authorities subsequently denied having given any diplomatic assurances to the Hungarian authorities;

F. whereas Lieutenant Safarov received a glorious welcome in Azerbaijan and a few hours after his return was granted a presidential pardon, set free and promoted to the rank of major during a public ceremony;

H. whereas on 31 August 2012 the Armenian President, Serzh Sargsyan, announced that Armenia was suspending its diplomatic relations with Hungary;

I. whereas Azerbaijan participates actively in the European Neighbourhood Policy and the Eastern Partnership, is a founding member of Euronest and has committed itself to respect democracy, human rights and the rule of law, which are core values of these initiatives;

J. whereas Azerbaijan has taken up a non-permanent seat in the United Nations Security Council (UNSC) for the 2012-2013 period and committed itself to uphold the values enshrined in the UN Charter and the Universal Declaration of Human Rights;

K. whereas Azerbaijan is a member of the Council of Europe and a party to the European Convention on Human Rights (ECHR) as well as to a number of other international human rights treaties, including the International Covenant on Civil and Political Rights;

1. Stresses the importance of the rule of law and of honouring commitments made;

2. Deplores the decision by the President of Azerbaijan to pardon Ramil Safarov, a convicted murderer sentenced by the courts of a Member State of the European Union; regards that decision as a gesture which could contribute to further escalation of the tensions between two countries, and which is exacerbating feelings of injustice and deepening the divide between those countries, and is further concerned that this act is jeopardising all peaceful reconciliation processes within the societies concerned and may undermine the possible future development of peaceful people-to-people contact in the region;

3. Considers that, while the presidential pardon granted to Mr Safarov complies with the letter of the Convention on the Transfer of Sentenced Persons, it runs contrary to the spirit of that international agreement, which was negotiated to allow the transfer of a person convicted on the territory of one state to serve the remainder of his or her sentence on the territory of another state;

4. Considers the presidential pardon granted to Mr Safarov as a violation of the diplomatic assurances given to the Hungarian authorities in Azerbaijan’s request for transfer on the basis of on the Convention on the Transfer of Sentenced Persons;

5. Deplores the hero’s welcome accorded to Mr Safarov in Azerbaijan and the decision to promote him to the rank of major and pay him eight years’ back salary upon his arrival, and is concerned about the example this sets for future generations and about the promotion and recognition he has received from the Azerbaijani state;

6. Takes the view that the frustration in Azerbaijan and Armenia over the lack of any substantial progress as regards the peace process in Nagorno-Karabakh does not justify either acts of revenge or futile provocations that add further tension to an already tense and fragile situation;

7. Expresses its support for the ongoing efforts of the European External Action Service (EEAS), the EU Special Representative for the South Caucasus and the Member States to defuse tensions and ensure that progress is made towards peace in the region;

8. Supports the Co-Chairs of the OSCE Minsk Group in their efforts to secure substantial progress in the peace process in Nagorno-Karabakh with a view to finding a lasting, comprehensive settlement in accordance with international law;

9. Insists that the EU should play a stronger role in the settlement of the conflict in Nagorno-Karabakh by supporting the implementation of confidence-building measures which will bring together Armenian and Azerbaijani communities and spread ideas of peace, reconciliation and trust on all sides;

10. Reiterates its position that the association agreement currently being negotiated between the EU and Azerbaijan should include clauses and benchmarks relating to the protection and promotion of human rights and the rule of law;

12. Instructs its President to forward this resolution to the EEAS, the European Council, the Commission, the respective governments and parliaments of the Republic of Azerbaijan and the Republic of Armenia, the Council of Europe, the OSCE and the UN Special Rapporteur on human rights and counter-terrorism.