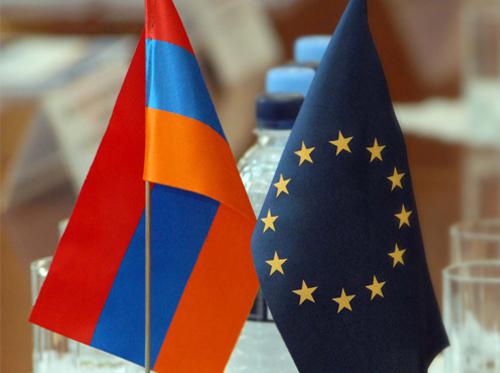 On 25 March 2015, the European Commission and the High Representative of the European Union for Foreign Affairs and Security Policy published the ‘Country Report’ for Armenia, about progress in the Implementation of the European Neighbourhood Policy for the year 2014 and containing a set of recommendations for the future. This document reports on the progress made in the implementation of the EU-Armenia European Neighbourhood Policy (ENP) Action Plan between 1 January and 31 December 2014. Developments outside this period are taken into consideration where relevant.

Below, please find an article from the RFE/RL regarding the report:

BRUSSELS — The European Commission has approved its 2014 European Neighborhood reports, highlighting progress and shortcomings made last year in the countries to the east and south of the European Union — several of them on Russia’s fringes.

Armenia backed out of signing a landmark agreement with the EU in 2013 and has since joined the Russian-dominated Eurasian Economic Union.

But the report says that negotiations soon will be launched on “a new EU-Armenia overarching agreement once the respective negotiating mandates have been approved.”

The EU says Armenia continued its democratic transition in 2014, but adds that “certain human rights issues, fundamental freedoms, and rule of law issues remained to be dealt with.”

The document says “the lack of trust in the judicial system persisted” and that “the fight against corruption remained a key issue.”

The EU also recommends more diversification in the country’s economy.

The EU sharply criticized Azerbaijan’s government for the political situation in the country.

The paper says there was a “regression in the democratic transition process and with regard to human rights and fundamental freedoms, e.g., the freedom of religion or belief, freedom of expression, and freedom of assembly.”

The EU urges Baku to improve the situation regarding democracy and human rights in the country and to create a more conducive political and legal environment for civil society.

The document notes that the security situation in Azerbaijan’s breakaway Nagorno-Karabakh territory “remained a matter of serious concern amid unprecedented incidents and casualties since 1994, as well as rise in confrontational rhetoric and a continued arms race.”

Baku and Yerevan have been locked in a conflict over Nagorno-Karabakh for nearly 25 years. Armenia-backed separatists seized the mainly ethnic Armenian-populated region during a war in the early 1990s that killed some 30,000 people.

According to the report, last year’s local elections were “generally in compliance with international standards, even though freedom of association and assembly were not fully ensured during the campaign.”

The text also says judicial independence remains fragile and that “the rights of minorities remained to be improved further” despite the adoption of an antidiscrimination law.

It also criticizes the treaties that Russia has signed with the breakaway regions Abkhazia and South Ossetia, noting that it violates Georgia’s territorial integrity.

The EU says it hopes that Tbilisi increases “the accountability and democratic oversight of law enforcement agencies” and encourages trade, education, travel, and investment across the administrative boundary line with Abkhazia and South Ossetia.

The report also states that “the media enjoyed a good level of freedom in regional comparison” but that questions remain over the concentration and transparency of media ownership.

It deplores that the reform of the Public Prosecutor’s Office stalled and that corruption remains a major issue.

The investment climate in the country also remains difficult, the report said.

The EU urges Moldova to improve corporate governance and oversight in the financial sector and to intensify the fight against corruption.

The European Commission says reforms in Ukraine were carried out in “a very difficult political, economic, social and military/security context of armed conflicts.”

The paper notes that civil society in the country has been developing quickly and that the decentralization process has been launched.

It also points out that the human rights situation both in the annexed Crimea and in eastern Ukraine has “worsened drastically.”

Russia annexed the Crimean Peninsula in March 2014 and a conflict between Ukrainian government forces and pro-Russian separatists in eastern Ukraine has killed more than 6,000 people since April.

Brussels suggests the implementation of a comprehensive anticorruption package in Ukraine, harmonization of all electoral legislation, comprehensive reform of the public administration, and ensuring that the lustration processes in the executive and the judiciary are in line with relevant international standards.