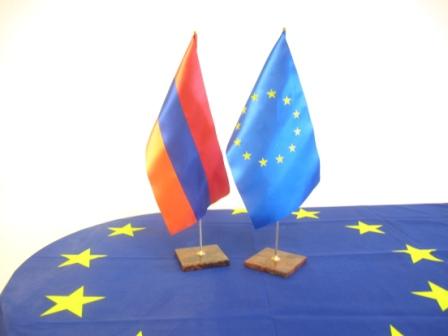 The European Commission and the High Representative of the Union for Foreign Affairs and Security Policy published on 15 May 2012 the annual “neighbourhood package” which included among other documents a country report on Armenia (on developments in 2011 and a set of recommendations for the future).

Below, please find an article of a1plus regarding the report:

YEREVAN, May 30, 2012. /a1plus/. Negotiations for an EU-Armenia Association Agreement (AA) within the Eastern Partnership progressed at good pace last year, while Armenia made substantial progress in implementing key recommendations allowing for the launching of negotiations on a Deep and Comprehensive Free Trade Area (DCFTA). Overall, Armenia also made good progress in the areas of Democracy and Human Rights.These are some of the conclusions of the Country Report on how EU-Armenia relations evolved between 1 January and 31 December 2011 released by the European Commission. The report includes recommendations on how Ukraine can step up the implementation of the AP.

On human rights, the report underlines the serious effort to address such issues, but says more needs to be done especially in the implementation of legislation. Positive steps were taken to prepare the country for upcoming elections, with changes in the electoral code and a presidential amnesty for the remaining persons detained for charges related to the March 2008 events, but the report highlights concerns about media freedom relating to the print media affiliation, limitations on TV broadcasting and to civil lawsuits for insult and defamation.

On the economic front, the report says Armenia showed encouraging signs of recovery after the severe recession that resulted from the international crisis in 2009. It continued to progress towards meeting the objectives of the Action Plan in the area of macro- economic policy, poverty reduction and social cohesion.

Directives for negotiation between the EU and Armenia of visa facilitation and readmission agreements were adopted in December, and negotiations started on 27-28 February. In October 2011, the EU-Armenia Mobility Partnership was established.

The report said further efforts were needed to achieve progress on the Nagorno-Karabakh conflict. It added the EU stood ready to provide enhanced support for confidence building measures, in support of and in full complementarity with the Minsk Group, with a view to facilitating further steps towards the implementation of peace.The EU continues to support the normalisation of relations between Armenia and Turkey without preconditions.

The report comes up with a number of recommendationswith a view to sustained implementation of the ENP Action Plan in 2012, in particular inviting Armenia to:

The Armenia Progress Report is part of a set of documents released by the EU in the framework of its annual assessment of the European Neighbourhood Policy.

Please click here to read a summary of the report.