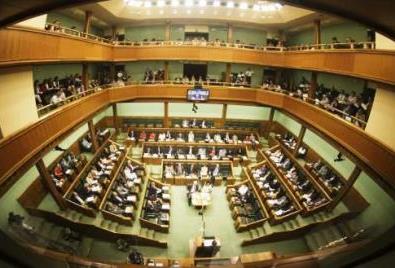 On Friday, September 12, 2014, a European Union regional parliament has, for the first time in history, adopted a motion supporting the self-determination of Nagorno-Karabakh following several official visits to the region that were organized by European Friends of Armenia (EuFoA) and the commitment of EuFoA contacts’ network.

The motion adopted today by the Basque Parliament praises the strong determination of the Nagorno-Karabakh people in their choice for democracy, despite the hard and difficult situation. In addition, it states that Karabakhi people have the right to decide their own future, namely their self-determination, which is the fundamental element in any negotiation for the final settlement of the conflict. Additionally, it emphasizes the importance of Nagorno-Karabakh’s participation in the OSCE Minsk Group conflict resolution negotiations.
Nagorno-Karabakh’s Foreign Minister, Karen Mirzoyan, with the assistance of European Friends of Armenia, travelled to the Basque Country on this occasion and had official visits, including meetings with Basque country government high officials, the head of the legislative, Ms Bakartxo Tejeria Otermin, and departmental and main local authorities, as well as companies with an interest in the region.
“I am particularly pleased by the acknowledgment of the democratic governance development of Nagorno-Karabakh and the recognition of the efforts they are doing in transposing EU legislation. The Nagorno-Karabakh society should be proud that their commitment for democracy as an inalienable part of the European space is not only recognised in the US, but also in the EU,” says EuFoA Director Eduardo Lorenzo Ochoa.

The Basque country is one of Spain’s 17 autonomous communities since 1979 and has a population of approximately 2.5 million people. It has its own executive and legislative institutions. The Basque government is among the sub-state governments that enjoys the highest level of competences in the European Union. Basque authorities are competent to lead policies in domains such as fiscal policy and tax collection or police management, having its own police force, among other more classic competences at regional level, such as health, education, from elementary schools to universities, or territorial development. Moreover, the Basque country has its own External Actions Service, at the head of a network of over 200 political and cultural delegations worldwide. From an economic point of view, the Basque country represents one of the European Union most developed areas, showing an annual GDP per capital of over 31 000€, 20 % higher than the EU average (25 700€).