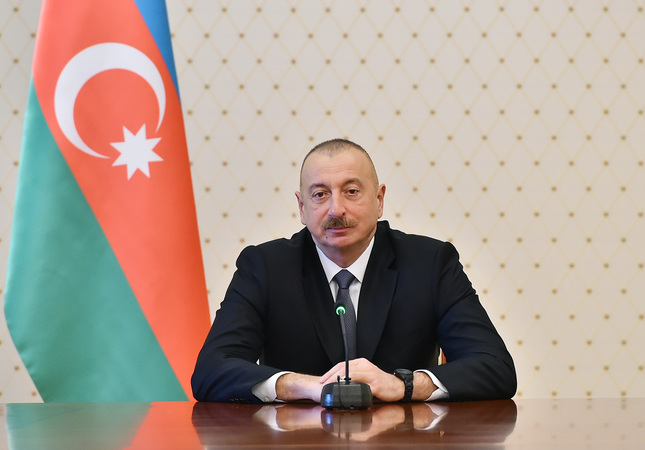 In a recent address to the Cabinet, the President of Azerbaijan, Ilham Alliyev has stated that Armenia is located in ancient Azerbaijani lands by emphasising that Zangezur, Irevan khanate belong to Azerbaijan. He has also emphatically put the status of Nagorno-Karabakh in doubt by discussing the origin of the name Karabakh, with the goal to prove that Nagorno-Karabakh in reality belongs to Azerbaijan. In addition, he blamed Armenia for creating the second Armenian state on the historical Azerbaijani lands. This statement for the first time transfers Aliyev’s war rhetoric beyond Nagorno-Karabakh, now directly threatening the Republic of Armenia.
Below, we provide you with an article from www.news.az about his latest utterance.

Sat 16 October 2010
On October 14 President Ilham Aliyev attended the opening of new secondary school No. 1 in Yevlakh.
According to the official website of the President of Azerbaijan, representatives of the city public and teaching staff cordially welcomed the leader and his spouse Mehriban Aliyeva.

Addressing the audience, President Ilham Aliyev said: ‘I congratulate you on the construction of the school. It is very beautiful and modern school. The chief of executive power told me that the local school had been in poor condition for many years. That building has been demolished and such a wonderful, beautiful school has been built instead. In addition, the school number one should be number one in everything. I warmly congratulate you, this is a great event. Children here will study and there are good conditions for teachers.

Teachers make a big deal. Azerbaijan has recently marked Teachers’ Day. Once again I congratulate you on this occasion. The role of teachers in society is big and very important. Teachers play the main role in educating the younger generation, adjusting children to the highest knowledge. We must make sure that all our children study well, become educated, because today education, knowledge is the basis for both citizens and the country. If we turn to the experience of the developed countries, we can see that their success is linked to education level.

Neither natural resources nor mineral resources play a decisive role here. The foundation is only education and knowledge as the development of the world is connected with scientific and technological progress. This requires competent personnel. These people are doing their first steps at schools.

We must bring our system of education to the highest level. Especially considering that today Azerbaijan has a great number of such excellent schools. More than two thousand schools have been built in the past five or six years alone. This work continues. We must make sure that Azerbaijan does not have a single school a poor, poor condition. School construction is very intense in Yevlakh too. I can say that probably the most schools construction is most intensive in Yevlakh. More than 20 schools have been built in the past few years. However, there are still schools that are not in the best condition. However, they will also be repaired or demolished, and in their place we will construct beautiful, modern schools. Infrastructure and education are two important factors which must be at a high level in Azerbaijan. It is possible to build a wonderful school. Today, our financial condition allows us doing this.

Children must understand that in order to occupy a worthy place in life they definitely need to be educated. Earlier some young people more often sought to obtain a diploma because at that time diploma opened all doors. During the Soviet times, everyone was provided with jobs. But now we live in conditions of market economy and open competition. Therefore, the presence of the diploma means nothing, there must be knowledge and professionalism. Therefore, the construction of schools, vocational schools, kindergartens – all this makes our education system stronger.

Of course, now we use best practices in Azerbaijan, which are applied in the world. Currently, there are e-learning programs, e-boards, computer programs. The work in this sphere is very good. 6-7 years there was a computer for every thousand of pupils. Now the country has one computer for 20 students, and children know the computer better than us. Sometimes we even ask them something. This is modernity, novelty, development.

I want to again congratulate you on this wonderful event – the opening of school. Once again I congratulate the teachers on their professional holiday. I wish you success and health’.

Expressing gratitude of the residents to the head of state for the care of Yevlakh, honored teacher Giyas Guliyev said:

‘Dear Mr. President, I wish you and all members of your family health and long life in the name of development and prosperity of the Azerbaijan Republic. God bless you from adversity! I am grateful to you. It is very gratifying that you have already paid your fifth visit to our Yevlakh. Thank you very much.’

President Ilham Aliyev: Thank you, you have raised very important moments. They are very important. These issues related to education, patriotic education receive great attention in Azerbaijan. Once again I want to say that the role of teachers is crucial.

I have repeatedly voiced my thoughts about it. You may also remember that I have had many speeches regarding the history, modern state and the future of the Karabakh conflict. But these feelings, these patriotic feelings are taught by teachers. Therefore, much depends on them. How a child will behave in 10-20 years depends on schools in Azerbaijan. Therefore, attention for education is not merely a direction in development, this is a global policy, which is decisive for the country. If the issues related to education are not settled correctly, this policy, all our other achievements will not be effective.

We have natural resources, a strong economy. Now the situation is stable and there is socio-political stability in Azerbaijan. But a country is developed by people. That is, their knowledge, ideas, will, and ability. I want very much and we all want our citizens to be good citizens, patriots, to love the home. For this purpose we must build a strong state. Our children should know history, since for many years in the Soviet period we knew only a part of it. Sometimes those who were introduced as heroes to us, in reality committed crimes against the Azerbaijani people.

We know this history well. Later we started to study and understand the real history. I, as a president and a citizen, is mostly outraged by the fact that we, for example, did not know what happened in 1918, 26 commissars were introduced as heroes, while in fact they demonstrated a great cruelty against Azerbaijanis. The matter is not that we did not know it earlier and we know it today. The matter is that we believed that they were heroes. That is we were brought up this way.

Shaumyan and other cruel Armenian criminals who showed violence against the Azerbaijani people were introduced as heroes in Azerbaijan. Monuments were erected in their memory. As you know, the memory in honor of 26 Baku commissars was created in the center of Baku. I instructed to demolish it. I did it personally! But how? I instructed the representatives of the Academy of Science, Ministry of Health and religious figures to take measures to transfer the remnants buried there to another place though people buried there once committed cruelty against Azerbaijanis. We again demonstrated tolerance, culture, peculiar of the Azerbaijani people and transferred the remnants to another place.

But this story must not repeat again in Azerbaijan. Our children should not ask questions like: “Who is he? Why is his monument set here? What has he done for the Azerbaijani people?That is, it is most frustrating to me that we did not know this and knew it earlier.

Our children are happy. They live in an independent country. Today our fate is in our hands. Azerbaijani people are masters of their destiny and our children should know our history, past and current realities well. At that meeting I said that the Azerbaijani people will never forget its lands.

I have repeatedly said that present-day Armenia, the territory, called the Republic of Armenia on the map, is an ancient Azerbaijani land. This is true. Certainly, Zangezur, Irevan khanate are our lands! Azerbaijanis have lived for centuries there. Armenians inhabited definite regions. But their mass resettlement occurred in the 19th. How can it be that in 1918 the declaration of Irevan as the capital of Armenia occurred at the decision of the government of Azerbaijan People’s Republic?! If those regions were related to the so-called “great Armenia”, so why did they ask your permission?!

Giyas Guliyev: you have told that they have been passed by a contract.

President Ilham Aliyev: Certainly, Karabakh is an ancient Azerbaijani land. Is there the word ‘Karabakh’ in Armenia? No! Khankendi in Karabakh was called Stepanakert in the Soviet Times. Where did Stepanakert come from? This name was taken from the name of Stepan Shaumyan. If this city had a historical past, related to Armenians, would they have given this name?! Its historical name is Khankendi. This is the reality. Our children must know this, they should know that present-day Armenia locates in ancient Azerbaijani lands.

Today Azerbaijan is a strong state. Today Azerbaijan is able to take actions not only in the sphere of education but also in other spheres. It is possible to see this, wherever you look at. At least see the renewing image of Yevlakh. You live here and possibly have already got used to it. But I, as the president, has paid the fifth visit here. I have visited here earlier. And I remember well the state it was there. Today Yevlakh does not lag behind the leading European countries. This is true.

Giyas Guliyev: But in fact, everyone says that Yevlakh is developing thanks to the activity of the president.

President Ilham Aliyev: and the head of executive powers

Giyas Guliyev: I think if the chief of executive power is praised…

President Ilham Aliyev: But I must tell it like it is. If something is going well, then I have to say about it, if you go wrong, it should be said about this. Huge work is being carried out here in Yevlakh. That made me very happy. The Chief Executive, all activists and citizens are doing everything for Yevlakh to become even more beautiful. Beautiful squares, buildings, roads, infrastructure, gas, electricity, drinking water. There is a huge volume of fresh water facilities installed there. Now there are thousands of people consuming pure water. The water that meets World Health Organization standards. And which water did they drink before? Filled with mud. That is, this is an invisible work. A visible work is: where else is there such a beautiful school! Only in Azerbaijan. So it should be. Azerbaijan must have everything advanced and on the highest level. Our people are capable of it and deserve it. Once again I congratulate you’.