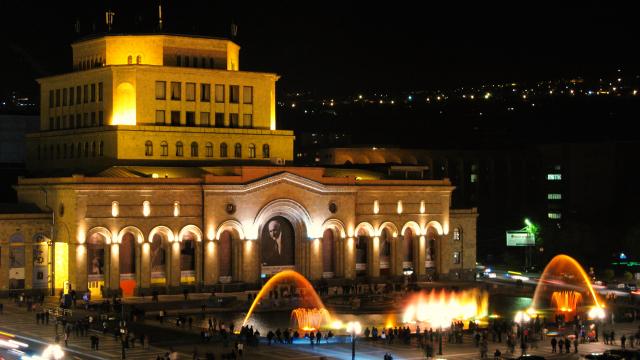 Diogo Pinto, EuFoA’s Director and Michael Kambeck, Co-founder of EuFoA, comment on Euobserver the outcomes of the recent parliamentary elections in Armenia and the impact on internal politics.

You can also find the text below:

The first parliamentary elections in Armenia (2 April) since the constitutional reform referendum of 2015 went quite unnoticed abroad, despite the vote being decisive for the small Christian country on Europe’s eastern fringe, landlocked between Georgia and Iran, Turkey and Azerbaijan.

The result was a victory for the ruling Republican Party of Armenia.

Armenia has arguably become an undeclared testing ground for how the current frictions between the big blocs, Russia and the EU, can be set aside.

The country was among the first of the Eastern Partnership (EaP) nations to conclude negotiations for an Association Agreement with the EU, including a Deep and Comprehensive Free Trade Area.

You may also remember that this Agreement was then abandoned a few days before its initialisation, to make way for Armenia’s membership in the Russian-led Eurasian Economic Union (EEU).

But the Armenian government did not lead the country down the path of Ukraine, nor that of Georgia, and certainly not that of Azerbaijan.

It chose its own path, seeking to profit from good relations with all of the big international players, trying to avoid suffering from the frictions between them. This balanced and rational foreign and security policy was used as a selling-point by the winning Republican Party during the election campaign.

Today, the EU is the single largest investor in “free and fair elections” in Armenia.

The Armenian government and the largest opposition forces struck a deal in 2016 to reform the electoral system, with assistance from the EU, the OSCE and the Council of Europe’s Venice Commission.

After the agreement passed, Armenia went from being a presidential system to a parliamentary republic.

When Serzh Sargsyan’s term as president ends next spring, his current and designated prime minister, Karen Karapetyan, is set to become the true leader of the country, whereas the next president will become more of a symbolic figurehead.

So the elections on 2 April simultaneously distributed the power from one person’s shoulders to many, and decided who those many shoulders will be – all of whom will sit in the National Assembly.

You can bet that president Serzh Sargsyan, a known chess enthusiast, has hand-crafted key elements of the law, as well as his party’s lists of candidates, to ensure a smooth transition.

The new system’s has some side-effects for small parties. For instance, several formerly represented MPs missed the threshold to enter the Assembly, including the first president of Armenia, Levon Ter-Petrosyan and his Congress party, but also the 2013 presidential runner-up Raffi Hovhannisyan.

The European Friends of Armenia, published a background paper on the parties.

Only a few weeks before the elections, the Armenian government struck a deal with the EU for an Enhanced and Comprehensive Partnership Agreement.

This outlines a large number of political and economic areas of cooperation and common goals: ranging from democracy and the rule of law to reducing non-tariff barriers to trade.

The agreement deserves its name, while Armenia cleverly involved its own key EEU protagonists in the negotiations, ensuring that the deal would not contradict EEU commitments.

It must have been an important signal to the Armenian people ahead of the elections: we are able to implement a complementary foreign policy, and our commitments to European values have not changed.

With Armenia as a testing ground: Did the elections pass the democracy test of the EU? 61% of the eligible voters cast their vote in an election in which the EU invested more than 7 million Euros.

Examples of the EU’s spending can be seen in: a nation-wide fingerprint identification system to exclude double voting, and large-scale camera installation in polling stations and counting rooms.

The preliminary OSCE-ODIHR report complains that “the elections were tainted by credible information about vote-buying, and pressure on civil servants and employees of private companies,” without elaborating on the scope.

But it concludes that all the investments have led to noticeable improvements. The observers praise the many new fraud-prevention measures, equal air time on the public TV channel H1, the cleaned up and published voting lists and the generally free campaigning climate.

The EU’s diplomatic service, the EEAS, put out a statement that despite information about vote-buying and pressure on civil servants and private employees, “The election result nevertheless reflects the overall will of the Armenian people”.

This comes as quite a contrast to verdicts on Turkey, Azerbaijan or Russia.

The first signals indicate that the EU will react constructively and appreciate this outcome. This means that during the last year of Serzh Sargsyan’s term, the new chapter of intensified cooperation between Armenia and the EU can begin.

It would be great news for everyone to see it grow into a success, but for that, much more action will be needed.