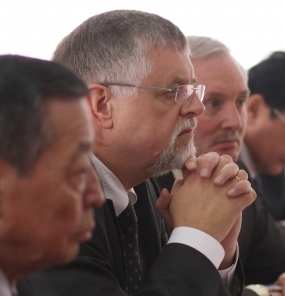 Ambassador Herbert Salber has been appointed as the EU Special Representative for South Caucasus and crisis in  Georgia following a proposal made by Catherine Ashton, EU High Representative for Foreign Affairs and Security Policy, and the political endorsement to his nomination by the EU Member States. Following a senior level career in the German Foreign Service, which included postings in Belgrade, Vienna and Moscow, Ambassador Salber has served amongst others as Head of the OSCE Centre in Almaty, Kazakhstan as well as Director of the OSCE’s Conflict Prevention Centre.

Below we suggest you media links on his appointment:

Head of the OSCE’s conflict prevention centre takes up post that has been vacant for more than four months.

Catherine Ashton, the European Union’s foreign policy chief, has named t Salber, a German diplomat, as the EU’s special envoy to the southern Caucasus, with special responsibility for monitoring the implementation of the deal that ended Russia’s invasion of Georgia in 2008.

Salber’s appointment, approved yesterday by member states’ ambassadors to the EU, comes five months after the previous EU special representative (EUSR), the French diplomat Philippe Lefort, announced that he was standing down.

Salber has been the director of the Conflict Prevention Centre of the Organization for Security and Co-operation in Europe (OSCE) for more than six years, a post that has ensured he has spent a great deal of time in the region. The status of Nagorno-Karabakh has been a bone of contention between Armenia and Azerbaijan for the past two decades – leading to deaths of border guards in most years recently. Two regions of Georgia, South Ossetia and Abkhazia, broke away from Georgia in early 1990s.

Like previous EUSRs, Salber is likely to find his efforts concerning the Karabakh dispute complicated by Azerbaijan’s determination to prevent him from entering Karabakh. The Russian-speaking Salber’s diplomacy with Armenia and Azerbaijan will be influenced by the creation, on 29 May, of the Eurasian Economic Union (EEU) by Russia, Belarus and Kazakhstan. Armenia is widely expected to join the EEU, while Azerbaijan has cited the unresolved dispute over Karabakh as a complication in its own discussions about joining the EEU.

Georgia will hold local elections on 15 June, with lingering questions both about the previous government’s abuses of human rights and about the current government’s prosecutions of suspected abuses.

Politics in both breakaway regions of Georgia have changed in recent weeks. Parliamentary elections held on Sunday (8 June) in South Ossetia were won by a party that advocates the region’s unification with Russia. In Abkhazia, the president, Aleksandr Ankvab, resigned on 1 June after street protests. Elections will be held in August.

Separately, the president of the European Commission, José Manuel Barroso, will today (12 June) attend a business conference in Georgia, before making a two-day trip to Azerbaijan (13-14 June). Over the past year, Azerbaijan’s importance to the EU has grown, following its choice of a pipeline to carry gas to Europe bypassing Russia, but simultaneously it has cracked down further on civil society.

Following a proposal by Catherine Ashton, EU High Representative for Foreign Affairs and Security Policy, EU Member States have given political endorsement to the nomination of Herbert Salber as EU Special Representative for the South Caucasus and the crisis in Georgia.

Pending the formal appointment by the Council, Ambassador Salber will co-chair the upcoming round of Geneva International Discussions 17-18 June on behalf of the European Union.

Following a senior level career in the German Foreign Service, which included postings in Belgrade, Vienna and Moscow, Ambassador Salber served as Head of the OSCE Centre in Almaty as well as Director of the OSCE’s Conflict Prevention Centre.

More sources: Ambassador Herbert Salber nominated as the next EU Special Representative for the South Caucasus and the crisis in Georgia : Read