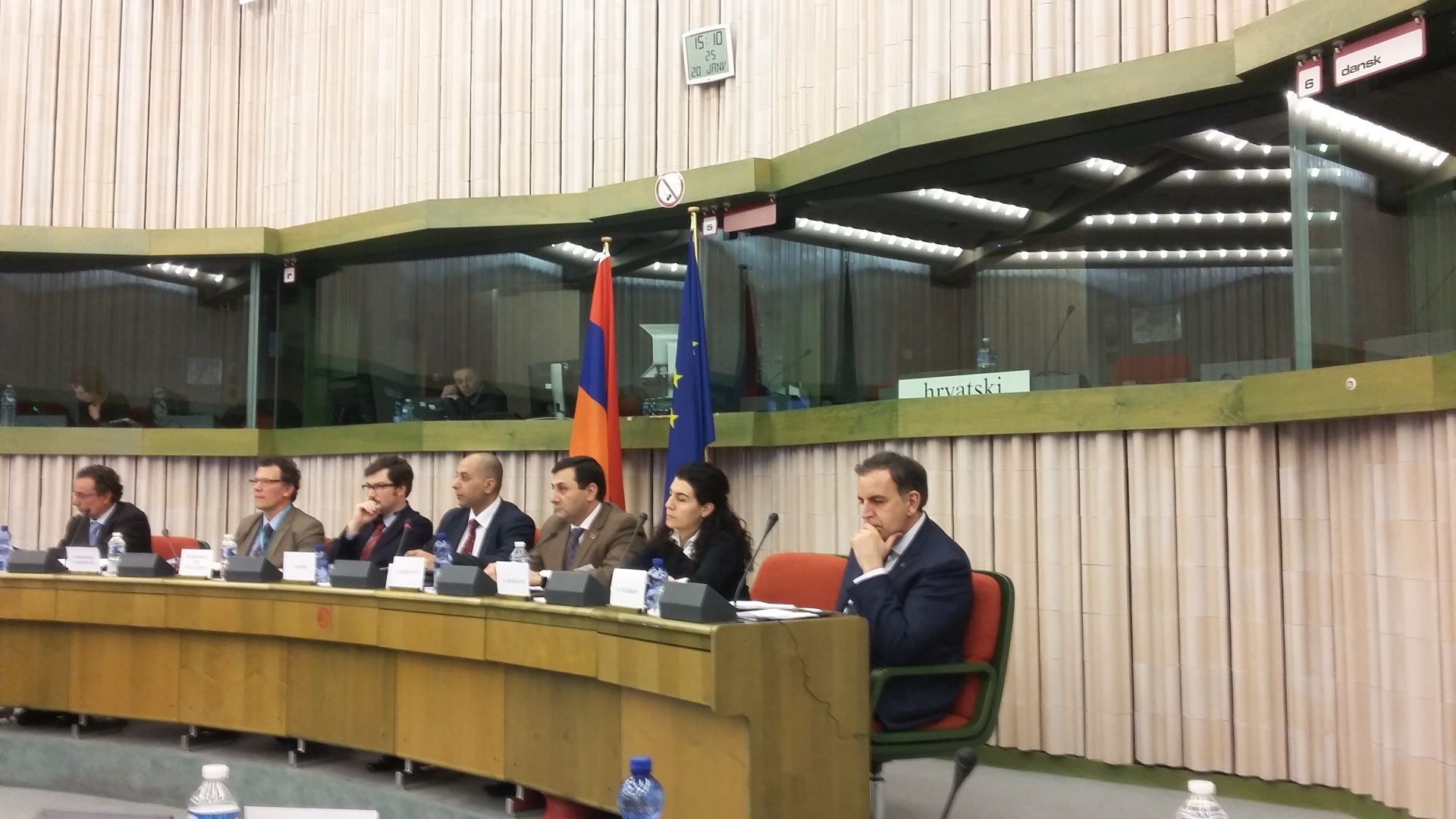 Today, on 21 January, the sixteenth meeting of the EU-Armenia Parliamentary Cooperation Committee (PCC), composed of members of the European and the Armenian parliaments, was held in Strasbourg. It took place just 3 days after their colleagues from the executive branch held the 16th EU-Armenia Cooperation Council.
Both the PCC and the Cooperation Council adopted joint statements on several relevant matters, most notably the future of EU-Armenia relations, developments within Armenia, and the Nagorno-Karabakh conflict.
European Friends of Armenia (EuFoA) warmly welcomes the results of this week’s meetings between European and Armenian officials. “It is particularly encouraging that meetings took place both between the government representatives and also the lawmakers, as this showcases the importance that EU and Armenia attach to their relations” comments Mr Eduardo Lorenzo Ochoa, EuFoA Director. “The depth and substance of the adopted statements can also give hope for strengthening of EU-Armenia relations, and especially quick signing of a new legally binding framework agreement.”
In this regard, the PCC welcomed “the high-level opening of EU-Armenia negotiations on 7 December 2015, in view of a new comprehensive framework agreement that would cover political, economic and sectoral cooperation”. Noting that EU and Armenia are not starting from scratch, but can use the results of the work carried in the negotiation process for the Association Agreement, the PCC expressed its hope for a “swift completion of the EU / Armenia negotiations”.
The mobility agenda was also referred to and both sides assessed positively the implementation of the Visa Facilitation and Readmission agreements which can open the way to the opening of a visa liberalisation dialogue. Both bodies underlined as well the importance of EU’s support in implementing the reforms agenda in Armenia.
In addition, the EU recognised also Armenia’s positive role played in the Syrian refugee crisis. The PCC called “on the European Commission and the EU member states to consider in a positive light any support request from the Armenian authorities in carrying out relevant programmes aimed at the further social integration of the Syrian refugees in Armenia.”
The worrisome situation in Nagorno-Karabakh was recalled, with the PCC expressing its deep concern regarding “the continued – and rising – human cost of the Nagorno-Karabakh conflict, and the increasingly serious violations of the cease-fire agreement, including by the use of heavy artillery / mortars, which repeatedly led to the loss of life even amongst the civilian population”. Both statements reiterated EU’s support to peaceful settlement of the conflict under the auspices of the OSCE Minsk Group, as the only internationally recognised framework mandated to mediate the talks. Moreover, the PCC strongly encouraged “pan-European and other international institutions and bodies to align with the OSCE-Minsk Group co-chairs statements in their motions and resolutions on Nagorno-Karabakh in order to contribute to the peaceful resolution of the conflict”.
As a measure of strengthening NK contacts with Europe, the Europe-Armenia Parliamentary Committee also “calls on the European Union to include in its exchange and mobility programmes students and teachers hailing from conflict areas, such as Nagorno-Karabakh, as outlined in the Bologna Process communiqué of May 2015 adopted also by all EU member states and the European Commission.”